March may see most of the nation's music, film, and tech junkies stream to our town, but for the country's theatre freaks, it's the time to head en masse to Louisville. That's where the Humana Festival of New American Plays gives drama queens a chance to see the same kind of fresh new work for the stage that South by Southwest attendees look for on screen. Though if you were to catch the 34th festival's final days at the Actors Theatre of Louisville this week, you might think you were still in Austin. The designer for the sets of three of the seven plays? Michael Raiford, whose sets and costumes have been enlivening shows at Zach Theatre for years. The recipient of the 2010 Heideman Award, given to the winner of ATL's National Ten-Minute Play Contest? Former Austin Script Works director and Salvage Vanguard Theater resident playwright Dan Dietz. One of the three other playwrights whose 10-minute play is being staged this year? First-year fellow at the Michener Center for Writers Diana Grisanti. One of the shows creating the biggest buzz at Humana this year? The Method Gun, that wry meditation on the craft of acting, gurus, and the question of truth or beauty, from our own Rude Mechanicals. It's too soon to say if Austin will completely annex Louisville after this, but since closing weekend is when all the national press attends, next week may tell the tale. For more information, visit www.actorstheatre.org. 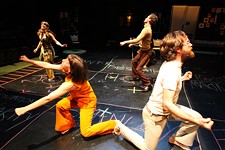