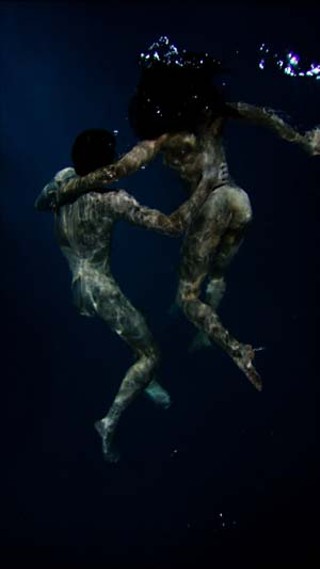 The first sign that the exhibition "Desire" is something a bit different is simply the title. Held between quotation marks, as in a snug embrace, is one word. No obligatory colon followed by a phrase expansively (or reductively) making explicit the point of this assemblage of art. Just a single, simple word denoting an emotional state we all know – and all know is anything but simple. There's no academic case being made here, the title signals. Rather, it's an inquiry into the human condition, a delving into this yearning we experience, this longing, this want for connection with another in the spirit or, more likely, the flesh. Considering that in modern museums, a premium is placed on the admirable goal of helping visitors to understand the art before them, to guide them toward a particular point of view, that's a less filtered, less instructional, looser, and, well, more personal approach than you expect to encounter.

This impression is reinforced when you actually walk through "Desire" at the Blanton Museum of Art. The works aren't organized by chronology, artistic movement, medium, or any other art-centric line. They are connected by their relationship to desire itself: to the stages we go through in our experience of it (anticipation, consummation, separation) or to the emotional states that can accompany it (lust, possessiveness, guilt). Any thread you might pick up from one work to the next isn't, however, buttressed by curatorial commentary posted in the galleries. There's relatively little text on the wall, and what is there doesn't offer some overarching exegesis of the art on view. The wall texts are individual responses to specific pieces commissioned from a variety of people – poets, novelists, and choreographers, as well as curators and critics. Because this isn't about context. It's about people reacting to these works and linking that to what they know of desire from their personal experience. Which is a way of freeing every visitor to the exhibition to make his or her own connections to the works therein from his or her own life, an invitation, really, for each viewer to respond (and respond creatively) to each piece of art in whatever way has meaning for him or her, and curatorial expertise be damned. Now, at heart, that may be what every exhibition wants its audience to do, but not many of them embed it in the show's bones in quite this way.

That "Desire" does so by design makes it something of a gamble for the University of Texas museum, as Annette Carlozzi, exhibition curator and just-promoted deputy director of the museum, will tell you: "It's definitely an experiment. And an experiment for the Blanton." In the upstairs galleries, where works from the museum's collections are periodically rotated, spaces will sometimes be organized around a theme, but the Blanton had never attempted anything of the sort as large as "Desire." And Carlozzi, in her role as the museum's curator of American and contemporary art and director of curatorial affairs, figured it was time.

"I thought, 'Why not do a temporary exhibition on a broad theme? – but one that really could have some sensitivity and specificity and surprises,'" she says. "My overall conceit was to organize the show along an emotional path, to focus on this unique experience that we all have in common but that we all have distinctly, and to lay out the work so that you would feel the breadth and depth of distinct responses, but at the same time there might be a subliminal build that would trace an arc of the experience of desire from the very first anticipatory moments through to some kind of consummation and then a reflection in an aftermath. That came about in response to the works that I found."

Works, it's worth noting, that Carlozzi has been looking at for more than a decade. The genesis of the exhibition came from the curator's exposure to Glenn Ligon's series Lest We Forget, in which the artist "memorialized" his momentary attractions to strangers encountered in public places by casting his thoughts in written form on bronze plaques, then mounting the plaques on the sites where they'd taken place, so they took on the appearance and character of historical markers. The plaques, Carlozzi writes in the exhibition catalog, "spoke to me about the catalytic power of desire, how it electrifies our imagination, changes our plans, and sometimes causes us to trangress boundaries drawn between private and public matters." The work's themes struck such a chord in her – "I'm a middle-aged person, so I was thinking a lot about desire," she says (though adding quickly: "As do young people, as do older people") – that it sparked in the curator an interest in seeing how other contemporary artists treated the subject of desire, which laid the foundation for a show. "Always, always, when I feel like I do my best work, it's because I go back to something that's of personal import to me, some idea that really resonates personally," Carlozzi says.

In the years following that contact with Ligon's work, the topic of desire continued to resonate with Carlozzi, the margins of her notebooks filled with thoughts and observations about it and how it was being treated by current artists. But even as she was identifying contemporary images related to desire, the culture was hurtling forward, experiencing seismic events – 9/11! The Iraq war! Katrina! Swine flu! Smart phones! iPods! Tweets! – that shook up the social landscape, transforming the ways in which we relate to, yearn for, and interface with one another. It was, notes Carlozzi, "such a decade of change in terms of how we think about desire, how we define intimacy. Here's something that's timeless but has also been subject to so much change that I'm not sure we can process it fully yet and understand it. We have feet in two different eras, essentially; we're living this change. And one thing art does is help show you new ways to think about it."

As it's laid out, "Desire" offers plenty of new ways to think about its subject, if only because Carlozzi has made such a concerted effort to seek out imagery that avoids the stock smoldering stares and heated embraces of Hollywood desire – say, footage of an octopus sensuously maneuvering through a glass cage as the haunting voice of Emmylou Harris sings "Wrecking Ball" (Amy Globus' Electric Sheep) or the laurel tree seemingly constructed of black and red wax blossoms (Petah Coyne's Untitled #1103 (Daphne)) or the first work you encounter as you enter the exhibition, Robert Kushner's Scriptorium: Devout Exercises of the Heart, which consists of 200 pages torn from different antique books, each of which has had painted on it a flower that was in season when the artist made the work. These works and others like them in the show ask for connections beyond the obvious, beyond the logical, beyond words; they depend upon impressionistic associations, intuitive leaps, for the sense of desire to fully flower.

That isn't to say that everything in "Desire" approaches the subject obliquely or by metaphor. There's not a small amount of skin and plenty of overt sexuality on view (enough that grownups who bring little ones can plan on being asked a lot of questions). It's a steamy show – literally in at least one work; Luisa Lambri's photograph Untitled (Menil House #01) depicts a door to a lush garden standing slightly open, the wall of windows around it fogged with moisture from the humidity outside. From the cool, spare manmade world, a sultry, sweaty primeval one beckons. You can imagine Paul Drake's bronzed pieces of cast-off clothing scattered on the gallery floor – tank top, bra, panties, boxers, socks – were left by paramours drawn into that damp and overripe Eden. Or perhaps it's the heroine of Cauleen Smith's video Elsewhere who has stepped through that doorway, finding the garden the ideal setting in which to have the knitted sweater she is wearing tantalizingly unraveled by another until her flesh is fully exposed. Or maybe it's the couple in Eve Sussman's video The Kiss, whom we see through a doorway built in the gallery, engaged in a prolonged moment of intimacy before their lips touch. 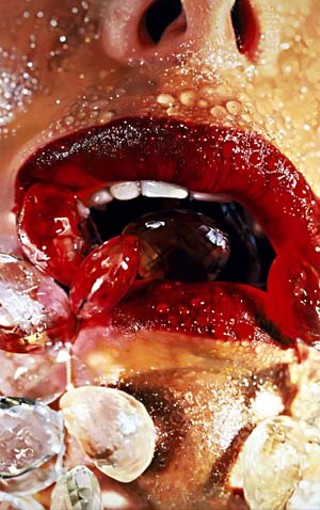 Throughout "Desire," works seem connected to one another in much the way the texts are connected to the art and the art is connected to us. Could the guy who practices Untying a Shoe With an Erection in Mads Lynnerup's video have also told the dick joke burned into wood by Richard Prince? Or donned the animal mask, chartreuse wig, and lemon swim trunks to recline for Olaf Breuning in his goofy spoof of odalisques? Could the aggressively erotic, sweaty crimson lips in Marilyn Minter's Crystal Swallow belong to the provocatively dressed young woman in Laurel Nakadate's fingerprint-smudged photographs? Were the impressions left in the white marble pillows of Valeska Soares' Duet left by the couple in Bill Viola's video Becoming Light, who have gone for a swim from which they never return? At times, these connections seem to pull you through "Desire" like a narrative. But there's only a story being told in the broadest sense, the same story that's been told for centuries: This is how human beings respond to desire. Artists of today may be able to depict certain aspects of desire more openly than in the past, but the feelings and psychological states are what they've always been. And through her exhibition, Annette Carlozzi is giving us the opportunity to immerse ourselves in that idea, to come to "the realization that desire is everywhere and in everything, connected to everything." She invites us to be like the lovers in Becoming Light, to dive down deep until we lose ourselves in the beauty and mystery of desire.

The Blanton Museum of Art will offer three more "Perspectives" programs in connection with the "Desire" exhibit. All will take place in the museum on Thursdays at 12:30pm.

March 25: Kathleen Higgins, professor in the department of philosophy

April 15: Carolyn Eastman, assistant professor in the department of history

"Desire" is on view through April 24 at the Blanton Museum of Art, MLK & Congress. For more information, visit www.blantonmuseum.org.

TV Eye
Back on the couch again