When it gets to the point of having a resident artist program for visiting puppeteers, you can consider this whole puppet trend of the past few years as more than a passing fancy. People are serious. True, we've lost one of the two companies devoted exclusively to puppetry (see "Geppetto Dreams Puppet Company"), but Trouble Puppet Theater Company looks to be picking up the slack, getting funding from the Jim Henson Foundation, attending the O'Neill National Puppetry Conference at the Eugene O'Neill Theater Center, and now launching this resident artist program, with which Trouble Puppet will bring to Austin puppet artists from around the world, giving them workspace, technical support, and performers so they can experiment with puppet design and workshop new pieces.

The first participant, Caroline Reck, is someone Trouble Puppet Artistic Director Connor Hopkins worked with at the O'Neill last summer (the website even has a photo of them performing together). She graduated from L'École Internationale de Théâtre Jacques Lecoq, an academy revered for its training in physical theatre, and from it co-founded the Glass Half Full Theatre Company. Hopkins brought her down here for a month to train a crew of local puppeteers to perform Fup Duck, a work for puppets and bluegrass musicians that she adapted from Jim Dodge's cult novella Fup. When the work premiered at the Load of Fun theatre in Baltimore last September, the score was played by the Bald Mountain Bluegrass Band, but for the Austin presentation this weekend, none other than the White Ghost Shivers will provide the music. The title character is a 20-pound waterfowl who makes life chaotic for the cranky octogenarian whiskey distiller who owns him and his gentle grandson, Tiny. The show is described as "witty, raunchy, and full of transcendent charm" – with enough raunch, apparently, that kids under 12 will not be admitted.

The run is just this week, so don't dawdle. And if you go on Friday, you can also enjoy Trouble Puppet's Late Night Puppet Cabaret with Hopkins; Trouble Puppet company members Aileen Adler, Heather Eakin, Robert Jacques, and Parker Dority; and the Bric-a-Brac Band.

Trouble Puppet's The Wars of Heaven, Part I
The eons-old battle between heaven and hell gets reorganized along gender lines 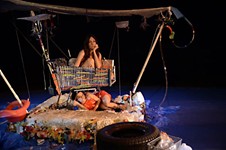 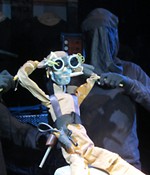