If the future is now, then the future of percussion will likely make it So

So Percussion: The quartet that formed therefrom.

some of the world's best and most daring composers, who've commissioned or been commissioned by gods of the modern music pantheon, who've charted their trajectory, their new and yet beaten path, in performances across the globe and in three solid albums. Four men: Drummers. Tappers. Whackers. Pounders of ... things.

Drums. Gongs. Pipes. Cymbals. Marimbas. Bells. Glockenspiels. Coffee cups. Sticks. Hair clippers. Duct tape. Who knows what they'll next use to tweak your tympanum, especially as their fourth album – due out this summer – is a collaboration with electronic boundary-breakers Matmos? They could knock you upside the head, somebody would sell it on iTunes.

On March 11, So Percussion, visiting from Brooklyn, performed at UT's McCullough Theatre. Two of the composers whose works they were performing were there, too: Dan Trueman and Steve Reich.

After beginning the evening with a sparse and eerie piece called Proximity by Cenk Ergün, the foursome played Reich's Mallet Quartet, a 15-minute composition for two vibraphones and two five-octave marimbas. I won't try to describe the precise and intricate dance of the mallets' heads against the metal bars of the vibraphones and the rosewood marimba keys, the ways in which the sounds flooded ears with rhythmic patterns as soaring as any strings; I won't repeat the Pulitzer-winning composer's description, in the program notes, of the purposefully static harmonics and the solo-then-canon melody of the three movements. I will say this: The quartet – and the Quartet – rocked the fuckin' house.

As did the world premiere of Dan Trueman's neither Anvil nor Pulley, written "for laptop-percussion quartet (with turntable)," although you'd have to warp and recalibrate the definition of "rock" to fully understand how that could be true. You'd have to tweak and shift the word, the way sound was tweaked and shifted in this long, multipartite composition that pitted the percussive men against a percussion machine – the devil's own metronome – and ratcheted up a rhythm-section showdown that seemed haunted by the ghost of a long-dead fiddle player. You'd have to be creative with the definition, the way the work creatively incorporated, among other unusual methods of sound generation, a bass drum and speaker driver rig that fused feedback drone into tones stretched like aural latex from a Bach prelude; a small array of digital drum machines and one good ol' analog drumkit; and four sets of tension-wire controllers modified from a $12 golf-based video game. It sounded like ... what Star Trek's Borg might play after assimilating a garage full of punk-rock heroes paying homage to Erik Satie?

Anyway, it worked, and it worked well. It – the entire night of music – was expertly performed, and it was a pleasure to behold. (The epilogue, a Q&A with the quartet and the two composers, was 20 minutes of informative back-and-forth – "What are those red wires you were pulling on?" – with the more curious half of the audience that remained.) If the future is now, as the saying goes, then the future of percussion will likely make it So. 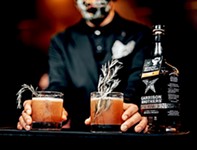