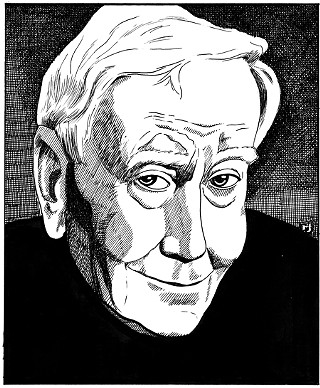 On March 14, Horton Foote would have celebrated his 94th birthday.

And he would have done so during one of the most remarkable years of his notable seven-decade career, one that saw not only more theatres across the nation dedicating entire seasons and festivals to his work and a new national award for playwrights established in his name (with one of the largest purses given for such a prize) (see "The Horton Foote Prize," Jan. 15) but, most importantly, the culmination of his life's work, The Orphans' Home Cycle – nine linked plays that jointly form the story of his parents' lives – reach the stage in an epic production that has earned widespread acclaim and seems likely for a run on Broadway. These were not only plays that were enormously personal for the Wharton, Texas, native and that he had been waiting more than three decades to see produced together, but also plays that he had taken a personal hand in recrafting for this premiere – paring each down to an hour and revising them to enhance the flow of the saga across its quarter-century span. Which means that Horton Foote was, at age 92, still a working playwright.

Alas, this extraordinary writer was 10 days shy of his 93rd birthday when he passed away in Hartford, Conn., where The Orphans' Home Cycle would be first seen at Hartford Stage. The many obituaries and tributes in the media appreciatively noted his two Oscars for screenwriting (To Kill a Mockingbird in 1962, Tender Mercies in 1983), his Pulitzer Prize for Drama for The Young Man From Atlanta (1995), his Emmy for adapting to television William Faulkner's Old Man (1997), and his National Medal of Arts from President Bill Clinton (2000), which collectively testified both to the longevity of Foote's career and to the recognition of his skills across different dramatic mediums. And while these notices also acknowledged his work on The Orphans' Home Cycle, none could say then what the finished product would be like or how it would be received.

What's come through in the response to the work at both Hartford Stage and Signature Theatre in New York City, where it's currently running, is a fresh sense of what Foote accomplished as a dramatist and the scope of his achievements. We're gaining a clearer image of just what sets him apart from so many of his peers in the American theatre.

Think, for instance, about that fact that Foote was still working into his 90s. He was that rare artist who ripened with time and gave us more of his richest work in middle age and beyond than in his early years. Beyond The Trip to Bountiful and The Traveling Lady, few of the works written when he was in his 30s get much attention nowadays. His two Oscars came when he was 46 and 67, and his Pulitzer when he was 79. Compare that to Foote's contemporaries among prominent playwrights: Arthur Miller and Tennessee Williams penned their signature works between the ages of 30 and 55. The same goes for that other American playwriting titan, Eugene O'Neill. Fifty-five was when Horton Foote was embarking on his most fertile period, the 15 years in which he penned the nine plays of The Orphans' Home Cycle; the film adaptations of three of them: Courtship, On Valentine's Day, and 1918; the screenplays for Tender Mercies and the Oscar-nominated The Trip to Bountiful; and a dozen other stage plays, long and short. It's the works of this era – rumbling into retirement age! – along with the even later Dividing the Estate (1989), The Young Man From Atlanta (1995), and The Carpetbagger's Children (2001), that brought Foote back into the national spotlight and on which his reputation stands.

That reputation, however, has been somewhat limited up to now in the eyes of Foote scholar Gerald Wood. The author of Horton Foote and the Theater of Intimacy and editor of Horton Foote: A Casebook, who also serves as dean of humanities and director of film studies at Carson-Newman College, writes: "His recognition has been somewhat diluted by his diversity as a writer. For example, many film people don't know of his long and distinguished career in theatre, his first love. Sectional 'attitudes' also come into play. Sometimes people in the South, particularly Texas, claim that his characters and stories are unique to the region, a point of view that encourages judging him as only a regional writer. On the flip side, some New Yorkers, also believing he is just a Texas writer, find little to interest them in the everyday life of Texans, especially ones outside the cowboy myths. And some people believe he can be pigeonholed into the realistic/naturalistic tradition. But Horton's plays are much more ambitious than those of Thornton Wilder or Paul Green, for example. Also, even though his work has religious import, he isn't as moralistic and theatrically conservative as Arthur Miller. Horton wrote outwardly, much more interested in other people's voices and stories than Tennessee Williams, who wrote inwardly, in service of his own demons and obsessions. And Horton Foote had a better ear for American English than Eugene O'Neill.

"It is becoming clear that Horton is more rigorously American than these writers, in the sense that he dealt with the social and moral history of our country. At the same time, and, as Reynolds Price has identified, Foote is the most musical of our writers. On the one hand, Horton Foote is very specific about the time and place of his stories. But he also masterfully weaves the images, characters, and stories into elaborate themes and variations reminiscent of American composers like (by his own admission) Charles Ives. That is the source of his experimentation: his desire to tell stories without formulas, never relying on the 'well made play' or easy theatrical technique. His dramas are quiet, subtle, seemingly effortless. But they build powerful subtexts of unstated anxiety, temptation, loss, death, and courage, without ever fully declaring their intentions. Never touching at all points, the stories echo each other until they form, like Faulkner's, a complex study of 20th-century life in the United States, with implications for all times and places."

Foote explored those themes through sharply drawn characters, many of whom managed to persevere through the trials they faced – another quality that distinguishes him from his fellow playwrights, whose masterworks rose out of the tradition of tragedy. In an introduction to the forthcoming book Farewell: Remembering Horton Foote (SMU Press), co-editors Marion Castleberry and Susan Christensen regard as one of Foote's greatest virtues "his deep love and respect for people and his ability to look beyond the external façade of an individual to the emotional core of his or her being. In all of his plays, he allowed us to join him in witnessing ordinary folks – people we recognize, people we know intimately – at crucial moments in their lives. A young girl breaks family ties to marry the boy she loves; an elderly woman, contemplating the end of her life, runs away from her children to return to the sacred home of her memory; a young married couple faces the death of an only child; a young boy is abandoned by his mother and left alone to face the pain of loneliness and betrayal. We understand the plight of these characters; we sympathize with their need for healing ties to community, family, and God; and we weep with them when they are faced with the difficult reality that each of them must finally embrace their life and accept their death. Horton never explained why some of his characters are able to face themselves and their situations with dignity and grace while others are unable to overcome life's obstacles, or to find love and contentment. But he wrote to discover, not to preach. His work stands on the precipice, between what can be known and what is never to be discovered, because it is beyond words, beyond human imagination. As revealed in the delicate, eloquent artistry of Horton Foote, life is a divine mystery transcendent of all earthly knowledge. There is no greater subject for a playwright to explore than the mysterious resilience of the human spirit."

The "quietness" of Foote's dramas, though – that absence of tragic weight and dramatic event – has led some to dismiss the writer's work as lacking significance. It's a criticism familiar to Different Stages Artistic Director Norman Blumensaadt, who is staging a production of The Carpetbagger's Children that opens, fittingly, in this month of Foote's birth and death anniversaries. "There will always be people who think nothing happens in a Foote play," he says. "To Kill a Mockingbird was made because Gregory Peck realized it was the role of a lifetime. The studio thought it was too slow, too talky, not enough action. And it won Academy Awards over Lawrence of Arabia. Many people are not interested in the drama that happens in the statement: 'Oh my god, I'm 10 years older today. Where did those 10 years go? What did I do?' It seems like nothing is happening in his plays, like Chekhov, but the more you work on them, streams open into pools and then open into lakes."

With the production of The Orphans' Home Cycle, those lakes may well be opening into oceans. In reviewing the current production, John Simon found it "suffused with Foote's almost uncanny humanity in portraying besetting hardships and hard-won victories, disheartening letdowns and dogged loyalties. Foote has a smiling empathy with all people, however humdrum, oddball or annoying." Wood says that the work further "demonstrates that Horton's writing deals with universal themes: courage in the face of loss, the search for order in a contingent world, and the existential value of love, not just its sentimentality." Christiansen and Castleberry note that "only one other American writer, August Wilson, had ever completed such an ambitious and unprecedented cycle project" and consider Foote's finished epic "one of the most impressive and skillfully written works in all of dramatic literature."

It was clear before the production of The Orphans' Home Cycle that Horton Foote was an original and important American voice. But with his masterwork realized onstage and experienced by audiences, he appears to be coming into his own as a major American voice, one for the ages. And, as Wood says, "Those of us who love his work hope it will lead to a national revival of interest in his work."

With that, you may rest in peace, Horton. The dance in Wharton goes on.