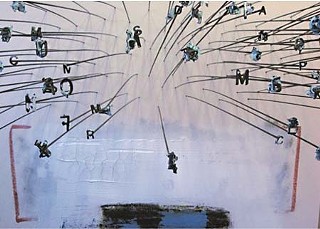 2) After Johannes Gutenberg invented (as far as Western civilization was concerned) movable type, texts exploded into the world, transforming that world in ways no one could have imagined. One can read of this in Marshall McLuhan's The Gutenberg Galaxy: The Making of Typographic Man. 3) When I write that the two artists have "exploded" texts, I'm not necessarily being metaphorical. Johnson, for instance, has created several pieces in which letters of plastic or metal type extend at arm's length from a work's foundation, almost quivering at the ends of thin metal rods, the letters forming phrases (or almost) of intriguing relevance to the piece as a whole. Regardless of what deeper effect this provides in the art-viewing mind, regardless of how this might succinctly map some three-way crossroad in the histories of sculpture and printing and painting, it provokes an immediate and more visceral reaction: Whoa, this is some awesome-looking shit.

4) There's a lot of text and typographic chicanery in The Galaxy. Not in McLuhan's Gutenberg Galaxy, I mean, but in The Galaxy magazine, a popular American periodical of the late 19th century. Mark Twain – the first author to submit a typewriter-produced manuscript (Life on the Mississippi) – was a columnist for The Galaxy and once created for it a map that satirized newspaper coverage of the Franco-Prussian War. The map was published, as a gibe at printers, in reverse.

5) Any sort of life on the Mississippi is going to require a boat of some kind.

6) The phrase "Grab an oar and row" recurs throughout the "Fifth-Business" exhibition, most noticeably in actual printing blocks attached to a piece of art. The printing on these blocks is, of course, in reverse. You want to count the number of times a boat (a rowboat, specifically) is referenced by Johnson in this exhibition, you're going to need a good memory or more fingers than just the ones you might type with.

7) Text, most likely created with fingers, is memory made flesh. Also: Every body is a book of blood, and so on.

8) This is my heart is one of the larger works by Debra Broz, and, sure enough, there's an approximated heart attached to the piece's blanker background, built up with the same crimson threads that bind the organ-symbol in place.

9) Things I think about, also by Broz, is an arrangement of tiny lapel pins (you are encouraged to take one of them, gratis), each of which displays a handwritten label of just what the piece's title indicates: "the structure of time," "parallel universes," "links/previously hidden connections," and so on. The one I took home with me says "words without meaning."

11) Debra Broz, Mark Johnson, and print itself – especially in this show – are very much alive.