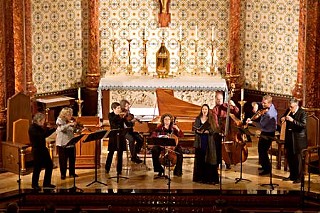 The line for tickets led out the door and snaked around the corner on this frigid Friday night. I took my place at the end of the line, huddled close amongst the others, the crowd buzzing in anticipation as it made its way to the warmth that lay within. It was exciting to know that this same scene was taking place concurrently at myriad venues across Downtown, in worship of the live music continuum offered up on any given night in our capital.

This night, St. Mary Cathedral played host to the Texas Early Music Project's winter concert, which included an impressive list of guest artists from around the world. More impressively, the gorgeous sanctuary, which easily holds 350, was packed from pew to pew. I overheard several ushers discussing the shortage of programs for the audience – rumor had it TEMP had only printed 250 – and I thought, in regard to problems, that's among the best kind to run into.

For more than two decades, TEMP has been Austin's ambassador to lesser-known medieval, Renaissance, and baroque music, celebrating with each performance a spirit of discovery for performer and listener alike. Looking over the composers listed on the program – Posch, Vesi, Schmelzer, and Muffat, to name a few – it was exciting to bear witness to the organization's exploration of Western musical heritage.

Joining concertmistress Laurie Young Stevens and other TEMP regulars were Dutch recorder virtuoso Paul Leenhouts, Argentine violinist Manfredo Kraemer, and Boston cellist Phoebe Carrai, each an internationally celebrated master of early music performance. Leenhouts' brilliant, clear tone was triumphant in the Berardi "Canzone Sesta," driving the piece with command. In Frescobaldi's "Canzon Prima," Carrai shone, the delicate solo a calming interlude to the surrounding ensemble work. The full ensemble opened the second act with the "Sinfonia a 6" by Vitali, a balanced, memorable piece followed by Biber's wonderful "Partita III," showcasing the dual virtuosity of Kraemer and Young Stevens in the vivid opening flourish and the furious, conclusive Ciacona. The only stumble came with Biagio Marini's "Passamezzo Concertato," an exciting ode to the trill that started strong but grew rushed and frantic toward the end, a rare moment of overindulgence on the part of the performers.

The responsibility for the night's vocal work fell to soprano Jenifer Thyssen, who has focused her career on early music – fortunately for early music. First in Simone Vesi's lovely "Laudate Pueri Dominum" and then in the concert's highlight performance of pieces from Il Giardino d'Amore by Alessandro Scarlatti (father Domenico), Thyssen's ebullient, striking vocal artistry soared above the audience. With a blend of lucid, pitch-perfect technique and glowing lyricism, Thyssen was marvelous.

At one moment in between pieces, a cell phone rang in the audience. This is usually an embarrassing and annoying moment, an unwelcome interruption to the spell cast by the performance. The ringtone, though, was an elegant classical piece, perhaps even baroque, though it was silenced too quickly to pinpoint. Not only glad to know I'm not the only one out there with a classical ringtone, I noticed the audience grin in unison, no one perturbed. It was a lighthearted accompaniment to a magical night of live music and discovery.