Austin in the sky, checkpoint down below 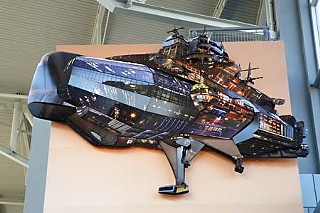 A pair of large alien spacecraft are hovering above the concourse at Austin-Bergstrom International Airport right this minute. Alien, because they don't look like a space shuttle or an Apollo or a Soyuz or any of the space-going shapes we're familiar with from real life. On the other hand, not alien at all, because they're built from sculpted images of this city's own burgeoning skyline(!) and because they're easily recognizable from our pop-cultural history of sci-fi cinema.

South Korean artist (and University of Texas grad) Young-Min Kang is the man responsible for this wonderment, having been commissioned by Austin's Art in Public Places program to provide his as-usual spectacular creations for display in that gateway to the skies. Each spaceship is 18 feet by 12 feet and weighs 600 pounds. The skyline depicted – via photos reproduced on 126 individually cut and shaped tiles – is the same for each sculpture, but one is a daytime view and the other is of night; both immensities were fabricated by a team at Imagecraft Exhibits, working for hours, for days, to embiggen the parameters of an artist's much smaller model.

This invoking of the familiar-within-the-alien-within-the-familiar isn't an unusual trope for Kang. As he said in a Chronicle interview (see "Facing the Media," March 25, 2005): "When I was in Korea, I was watching all the Hollywood movies, so I had a certain kind of imagination about Americans and American culture. And I'm not sure if ... I really liked it or it was more just curiosity. But when I got here, my image of it was broken, and I had to totally rebuild my idea of America."

And now here's the major visual impact of our city rebuilt as vessels – Spaceship Austin Downtown Cruisers – designed to go where no one, except in imagination, has gone before. Of course, in some fantasies, it's the aliens that come to this planet in their long-voyaging spacecraft and wind up, as in the recent thriller District 9, in government-restricted ghettos, right? We mention this, even beyond any potential subtext of South Korean/American politics, as ironically apropos – because Kang's newest public artworks are located past security checkpoints and thus available to ticketed passengers only.