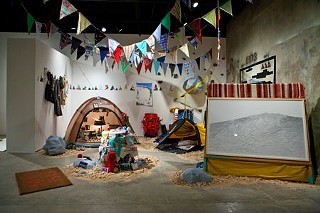 Mountains as landscape-defining masses: The lithic record of seismic obstrepery. World warts. Horizon busters. That, as the saying goes, is about the size of it. This juried exhibition at

Creative Research Lab, featuring University of Texas students and alumni and other Austin artists, seeks to provide such immensity of ground.

"This broad and open platform is a rare opportunity for artists to reach beyond the normal scope of art making and investigate the possibility of creating something epic," reads the official CRL description. "Right," you might imagine the artists responding as they judge the venue's parameters, the space available for rendering their visions into three big fat dimensions, "I got your 'epic' right here."

Stephanie Bonham covers one corner of the generous space with a bit of audio history in her All the Streisand Records in Town, having scoured local shops to gather and arrange a collection of the "most abundant and least sought-after used vinyl in circulation today." Not so mountainously awe-inspiring of a gambit, although a helluva hoot, Barbra-wise, and spurring rumination about the correspondence between this specific unwanted oeuvre and the general fate of vinyl in a digital world. Also, of course, weren't a few of these familiar discs and their sleeves released by Sony's, ah, Epic Records?

Mark Aguhar presents a more personal mini-epic in his Guestbook, having arranged a pair of chairs and a small table into a sitting room, the defining wall of which is horizontally lined with strings. For the show's opening, Aguhar sat in one chair and sketched (with a variety of colored pens) any visitor sitting in the other chair, meanwhile chatting amiably, and then used clothespins to hang each tiny portrait on the stringed wall. Two things: 1) Although the artist won't be there every day, the portraits will remain for your viewing; 2) Although no clothing was removed, Aguhar drew everyone as if they were naked except for a pair of tighty-whities.

Over in the gallery's far corner is the most intricate installation of the show, Camp Base Camp: Everest Friends, a work that must have taken an epic number of hours to create. Peter Reichardt, Mary Rothlisberger, and Kristyn Weaver have rendered the show's title almost literally – by building a launch site for a team that seems intent on conquering the mountain called Art. Tents, sleeping bags, camping gear, even an altar, all appropriately embellished with fierce craft and creative paraphernalia. This trio of artists could serve as Sherpas to guide the rest of us up that shifty mountain, pausing, as they climb with rough-hewn pitons and ropes woven from hand-dyed hemp, to point out the other highlights of this CRL show: Nicholas Dertien's Asthma Through a Transparent Body, three figures of clear blown glass, suspended from the ceiling, gorgeously bathed in projected light and shadow; Anthony Garza's what came before, enormous graphite portraits of the skulls of prehistoric creatures; and TV Nest by Kendra Kinsey: an eerie, Cronenbergian tableau in which plush couches and chairs are embedded with working but dead-channel TV screens.

And there's yet more for your exploration: North face, south face, "Ideas of Mountains" is a peak of no small aesthetic excitement.