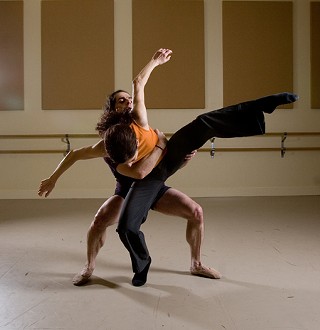 If you've seen any contemporary dance at all, you know how, too often, a movement sequence is broken when the dancer stiffly snaps into ballet mode to prepare for a classical step: "OK, I'm going to do a pirouette now." As evidenced by the

inaugural performance of Voice Dance Company, dancers don't do this in the work of choreographer and Artistic Director Gina Patterson. Nor do they do a lot of fan kicks. Instead, ballet and the classical line are the basis for innovative contemporary movement that is rarely predictable. Performed by a group of very good dancers hand-picked by Patterson from far and wide, the selection of her new and recent work demonstrated that classically based contemporary dance has a pulse – it's alive! – and hinted at further development to come.

The first half of the program was a series of 10 loosely connected segments, some short, some shorter. In "In Time," a Latin-flavored solo, the quiet intensity of Ballet Austin dancer Michelle Thompson was utilized perfectly. So often with attempts at seductive Latin style, the wrists and hands are flipped around grotesquely, resulting in caricature. But here, everything below the forearms was somewhat detached and relaxed, giving the movement the internal heat and outward calm that marks authentic Latin styles as well as updating it with Thompson's own cool athleticism.

Patterson herself danced in one piece, "Elephant Eyes," a duet with her husband and Voice co-founder Eric Midgley. With subtle movements like the gradual flex of every muscle in the foot, a mood of anguish infused their fluid, sure partnering. Later, in "Blindsided," Masa Kolar and Chris Hannon performed a very different duet with a lot of head-initiated contact: His head on her back pushed her across the stage; they ran with heads pressed together and pitched forward; she caught him at the neck to stop him from falling forward. The result was sweetness plus a bit of violence. At times in both duets, the couples reminded me of ice dancers: One moment they're side by side, doing the same thing, then all of a sudden he's facing another direction and she's across the rink landing a triple lutz. And you don't know how it happened, because it's so darn smooth.

Patterson's fresh, unforced humor, and the dancers' ability to execute it perfectly, was a happy surprise throughout the evening, but especially so in "Balkan Chicks," a section in which Kolar and Rebecca Niziol challenged each other in rapid movement series on and around orange chairs from your high school detention hall. Hannon, looking dazed, walked the perimeter of the stage and at times merged into the fun. As with her smooth transitions in partnering, Patterson has the ability to move the dancers seamlessly in and out of groups and from unison to individual movement.

"Your Provision" was a sensual, ethereal duet for Maggie Small and Fernando Sabino, the most classical of the dancers. Occasionally it seemed that he was a figment of her imagination, sparked by a mysterious book she had been reading at the beginning of the piece; other times, the duet had the quality of a Romeo and Juliet balcony scene. At one moment, the pair knelt, facing upstage, at a low table, as if in marriage. Near the end of the piece, as they walked upstage, she fell into a tremendous backbend, hanging her long, waiflike body over his arm for a second before he righted her.

For the second half of the program, Patterson restaged her sextet "My Witness," commissioned by DanceWorks Chicago last March. Led by Niziol, who created the role in Chicago, and Midgley, the dancers shared the stage with the Chicago folk band Sons of the Never Wrong, whose tunes ranged from quirky to wistful. My favorite section was one for three couples, danced to a song whose lyrics can be summarized as "You're a crazy dude, but I love you anyway." It was a cheeky take on the romantic duet – a genre represented quite a bit in the program, but in ways varied and innovative, current and generally relatable. And that's everything you need in choreography, right there.