Out of the ashes, new zaniness

Theatre companies, like bands, break up all the time, but it's not every day that you see one reassemble. That's what makes a new production from the Austin Commedia Society, opening this week at Club de Ville, more than usually noteworthy. The company was last seen in action around the time that the U.S. invaded Iraq – it has, in fact, been defunct longer than it was originally in existence.

ACS formed in 1999 and over a four-year span staged about a dozen original scenarios rooted in the style of – what else? – commedia dell'arte. Its crowning achievement was the Commedia dell'Austin Festival 2001, which brought together five commedia troupes from across the country and several specialists from around the world for two weeks of classes and performances. Unfortunately, just three days into it, 9/11 happened and sucked the energy right out of the festival and, it turned out, the group as well.

"People were just kind of ready to move on," remembers Aaron Johnson, the group's artistic director. "There was no bitterness. We shook hands, gave each other great big hugs, but it was like, 'We gotta go try something different now.'"

Society members dispersed to new pursuits – graduate degrees, jobs, having kids – and, in some cases, new cities. Johnson himself relocated to South Bend, Ind., where he worked for a while in an Irish pub run by the parents of ACS member Kate Meehan. After that, he pushed on to Chicago and wound up managing a theatre company, then headed west to New Mexico for a brief stint in his parents' jewelry business. Then, last year, Meehan's parents again offered Johnson a job in a new Irish pub they were opening ... in Austin. That brought him back to town and reconnected him with Meehan, who then had the bright idea of seeing if they still had any commedia chops left.

A few phone calls found Paul Joiner and Genevieve Kinney of the ACS old guard eager to play again, and voila! The band was back together. As they were rising from the ashes of Austin Commedia Society, they adopted a new name, La Fenice – Italian for the phoenix. They developed a new original scenario, Suitors and Tutors, and even persuaded an instructor from the 2001 festival, Gian Giacomo Colli, to come down and direct it.

Going back to commedia after several years compares, Johnson says, to riding a bicycle. "You don't forget, but if you don't ride it for a little while, you have to knock the rust off the chain and have the brakes tightened and things like that. It was not a sluggish start, but it was like, 'Okay, do we still know how to do this?' In the last week, everyone has reattained that comfort level [of the ACS days]. We're laughing in rehearsal, having a great time, trying out all kinds of new stuff."

That bodes well for this week's opening at Club de Ville. To hear him talk, Johnson's only real concern is the weather. See, the company plans to perform on the outdoor stage, But he notes that the club's outdoor heaters will be fired up, and he'll be handing out a blanket with each admission. And if the crowd still thinks it's too cold, they'll move the fun indoors. 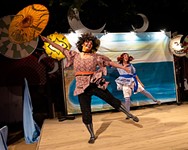