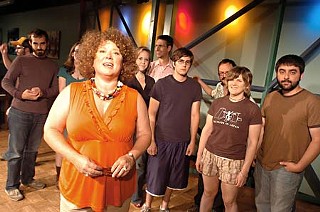 5) STAND-UP GETS SOME SERIOUS FESTIVAL ATTENTION with supremely stellar bookings from South by Southwest and Fun Fun Fun Fest. Hey Austin City Limits, maybe Galifianakis over G. Love for once?

6) THE AD HOC WWW.LASTGASCOMEDY.COM CHAMPIONS AUSTIN'S COMEDY SCENE Hopefully, committing to a caliber of content in 2010 will temper occasional bouts of lazy writing and bitchy inside baseball.

7) NEKO CASE REVEALS HER TOUR BUS BACCHANALIA AND THE SECRET TO A WOMAN'S HEART It's chocolate milk and The Bob Newhart Show DVDs, the ridiculously charming singer told a crowd at Stubb's.

8) THE 24TH ANNUAL FUNNIEST PERSON IN AUSTIN CONTEST was Exhibit A for the size and strength of our stand-up scene. The finals made 2009 a bar-raising year with a bounty of deserving title contenders, so all the more congrats to winner Bryson Turner.

9) HATS OFF TO THE VELVEETA ROOM, THE (NEWLY OWNED) HIDEOUT, COLDTOWNE, ESTHER'S FOLLIES, CAP CITY, 'MISPRINT' MAGAZINE, and every other comedy venue/outlet that was able to stay afloat during the Great Recession of Aught Nine. Cheers.