Grants in their stockings 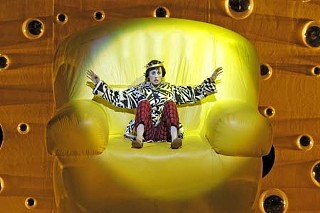 The National Endowment for the Arts has made its annual impersonation of St. Nick and dropped some federal funding into the stockings of a dozen local culture providers. It's nice to see so many five-figure grants and to see the city's Cultural Arts Division get $35,000 to build up its very useful Take It to the Next Level workshop series. And congratulations to Vortex Repertory Company on getting its first-ever show of support from the NEA and to Austin Lyric Opera and the Austin Chamber Music Center for teaming up to present the opera based on Oliver Sacks' The Man Who Mistook His Wife for a Hat. Here are the recipients whose holidays will be a bit brighter, thanks to Santa NEA:

Austin Lyric Opera: $20,000 to support performances of L'Etoile (The Star), by Emmanuel Chabrier, as well as education and outreach activities;

Badgerdog Literary Publishing Inc.: $20,000 to support the publication, promotion, and distribution of the quarterly journal American Short Fiction and the publication of short stories exclusively on its website;

City of Austin Cultural Arts Division: $35,000 to support Take It to the Next Level, a workshop and speaker series for Austin cultural organizations, and to produce a statewide conference in partnership with the Texas Commission on the Arts;

Dance Umbrella: $20,000 to support Discover Dance, a program in which dance companies that it presents in residency offer education and outreach activities;

Mexic-Arte Museum: $25,000 to support "Young Latino Artists in Retrospect," an exhibition that will feature current work by artists who have participated in this annual exhibition over the years;

Tapestry Dance Company: $10,000 to support the 10th annual Soul to Sole Tap Festival, including performances and education and outreach activities;

University of Texas Press: $7,500 to support the acquisition, publication, promotion, and distribution of English-language translations, with a specific focus on Latin America and the Middle East;

Vortex Repertory Company: $15,000 to support a new production of the musical theatre adaptation of Sleeping Beauty, with a revised script and score by creators Bonnie Cullum and Content Love Knowles;

Women & Their Work: $25,000 to support a series of solo exhibitions for young and emerging women artists of Texas, with accompanying catalogs, educational programs, and outreach activities.