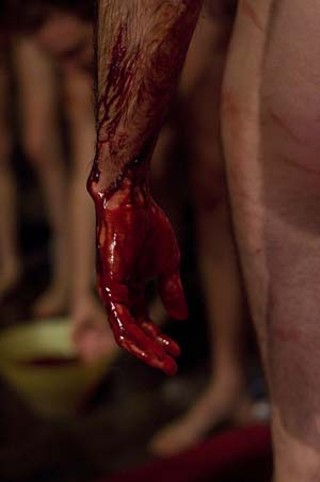 The Off Center, through Dec. 20

The mountain outside the city is where it all went down. The dancing. The drinking. The caressing of the flesh. And, later, the tearing of the flesh as well. The women of Thebes went there to join in the rites of the new god in town, Dionysus, and the city's ruler, Pentheus, tempted by the rumors of their ecstasy, ventured after them to see the spectacle. But Dionysus, stung by the king's disdain, tricked the Theban women into ripping the man to pieces.

The mountain is where it always goes down – that place beyond the city walls and the constraints of society's laws and codes, where figures of drama and literature have traditionally found liberation, freedom, and new knowledge of themselves, for good or ill. It's the wood to which the young lovers flee in A Midsummer Night's Dream, the river where Huck Finn is at home. In The Bacchae, that Greek tragedy from which Dionysus in 69 was drawn, it is the chaos to Thebes' order, the ecstatic release to society's restraint.

In producing Dionysus in 69 as it was originally staged more than 40 years ago, the Rude Mechanicals take us to the mountain in more ways than one. They create not only that space of ecstatic ritual described by Euripides but also, in a rough room next to the Rudes' home stage, the Dionysian space that the Performance Group made in 1968: a space beyond the walls of conventional theatre, one in a Greenwich Village garage, where the barriers between playgoers and players were smashed, the lines between player and character blurred. This "environmental theatre" fashioned by the group and director Richard Schechner proved influential to generations of experimental theatre troupes, the Rudes not least among them.

But in their diligent efforts to reconstruct this revolutionary production as faithfully as they can, the Rudes have uncharacteristically confined themselves within the choices and movements of other actors. Thomas Graves is not just playing Dionysus but playing the original production's William Finley playing Dionysus; we get Josh Meyer as William Shepherd as Pentheus. It puts this Dionysian gang in the paradoxical position of submitting to order as it re-creates chaos – the Rudes recast as Pentheus to get to the mountain they desire. This mad challenge is one they meet in typical Rudes style, by committing to it fully. It's evident in the physical – the way the actors all shed their clothes, say, and move freely in the nude – but even more in the spiritual, in the abandon with which they dance and the tenderness with which they caress compliant audience members, in the urgency with which Meyer races around the space trying to silence those mocking him, in the roguish command of Graves. In their playing is a sense of surrender that echoes the bacchantes' yielding of themselves to their god.

You can't watch the Rudes' re-creation without being conscious of the gap in time between Dionysus' creation and today. It's too broad to miss, and it's all some playgoers will see; to them, the show will appear to be just an intriguing intellectual exercise in historical reconstruction or else hopelessly dated hippie-theatre shit. But if you can cast one eye beyond that to the source – that is, Euripides' drama – this production has the power to take you to another place: the seat of tragedy. For all its latter-day busting of theatrical convention, Dionysus in 69 always returns to good old-fashioned narrative, to that ancient story of order pitted against chaos, mind against body, man against god. The Rudes play to that, and their commitment also allows us to feel their characters' pride and yearning and horror. Ultimately, their re-creation invites us to experience this story in a rare and personal way, stepping outside ourselves and into the skins of the bacchantes. "Come to the mountain," the actors say as the show opens. "Let the dance begin."