Love notes to a community "Labor of love" doesn't quite hit the mark in describing Rama Tiru's new book, Austin: East of I-35. Not that the project wasn't one – the photographer spent close to three years documenting Eastside residents, events, businesses, and organizations with her camera; interviewing individuals and recording their stories; writing the backgrounds and histories of her subjects; seeking out designers and a publisher to make it a book; and obtaining the funds to have it published – but what you don't see on the page is anything resembling "labor." This is the result of a "love affair," to borrow the term Tiru uses in her foreword, and as such, it radiates the pure pleasure of a romance. What comes through in every image and piece of text is the affection and admiration that Tiru has for the people and places and institutions that make up the Eastside. As one so often does with a lover, Tiru wants to know everything she can about the object of her affection and then wants to share everything she learns with everyone she meets. That's a lucky thing for East Austin, which has long been neglected by the city as a whole and is home to so many people and programs and stories that deserve the attention of every Austinite. Tiru chronicles the political efforts of the Brown Berets of Austin and PODER (People in Defense of Earth and Her Resources), the social service activities of Breakthrough Austin and Meals on Wheels, and the cultural legacies of the Carver Museum & Cultural Center, Harold McMillan's DiverseArts, and the Victory Grill. She takes us inside homegrown community businesses, such as Green & White Grocery, Triple Crown Tattoo Parlour, Dan's Hair Styling, and the Golden Touch Enrichment Academy (a cosmetology school), and inside clubs such as Ms. Bea's and the Eldorado Club House that also serve as community gathering places. She takes us through the year, marking key dates on the Eastside calendar: Juneteenth, the East Austin Studio Tour, Día de los Muertos, South by Southwest. And she introduces us to the citizens of the community, both those whose names may be familiar – Carver curator Bernadette Phifer, The Villager Editor Tommy Wyatt, Juan in a Million owner Juan Meza, BYDEE artist Brian Joseph – and those whose names you may not know – Lola of the Nubian Queen restaurant, former boxer Richard "Rocky" Medrano, activist Sabino Renteria, Lee Gresham of the East Side Pedal Pushers bike shop, the late Mrs. Chapa. Each photograph is dense with detail, as if Tiru is trying to jam as much information as possible into a single image. The result is that we see a community that's alive with activity, personality, history, and color. Especially color. The pictures are vibrant with it, in the foliage, on the buildings, in the clothing of the people, in the people themselves: candy-apple reds, canary yellows, turquoises, emeralds, pinks, magentas, mochas, sages, crimsons, chocolates, maroons, tans, robin's-egg blues. They excite the eye as you're looking at the book, and when you've set it down leave an after-image of Austin east of I-35 that's full of vitality. For more information, visit www.tirugallery.com. 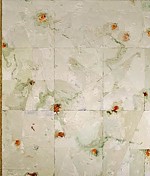