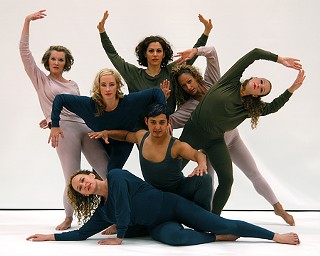 Three of the eight pieces on Ballet East's IN under & Through program were dedicated to Lucia Rodriguez, the local dancer whose accidental death this past summer deeply saddened many

in the dance community. (After a wrong turn, she drove her car down a poorly labeled boat ramp and drowned in Lake Austin.) While the presiding mood of the program was one of sobriety and fear of things greater, it was among the more solid evenings that I've seen the company produce in my short time here.

Gina Patterson's "Espiritu," one of the works dedicated to Rodriguez, opened the show. A program note explained that while Patterson at first intended the piece to be celebratory, it developed to also encompass thoughts on the "seeming randomness of life," and this development was evident in the structure. The first movement was in fact celebratory, with lots of carefree, sambalike hip action, but the second movement brought a drastic mood switch, evidenced by off-balance back bends that teetered so far I was afraid the young, fearless Juan P. Flores would fall back onto his head. In the third movement, the dancers were suddenly and clearly compelled by an exterior force, possibly the "espiritu del agua" mentioned in the accompanying song by Totó La Momposina.

The second piece, "Lest" by Eric Midgely, began blandly but was more engaging in the second section, in which the dancers extended their hands, elbows bent at their sides, and made peacocklike jerks of the head. Next, a solo work choreographed and performed by Katherine L. Feiock McCall appeared to have little to do with its program note about the female spirit and mother nature. "Buscando America," by Sheila Cruz, ended the first half with a high-energy, salsa-flavored piece, but its concept of two stock cultural groups merging and separating was underdeveloped at best.

The nine dancers in Melissa Villarreal's "Footprints" were all avatars of a character, quite literally Rodriguez, but the solidarity was broken as they made their final exit: eight stage left, one stage right. The mood of Dixon Mena's "Solido Pero No Inflexible" was a shade different from that of the pieces preceding it: still serious and somewhat tormented yet less pensive and edgier. Dancer Hailley Schwartz's balletic, supple lines and attack were featured in nearly every piece, as was her gorgeous, reaching, arabesque penchée (a vertical 180-degree split in which the toe, head, arms, and supporting leg all stretch to infinity in different directions), but Mena's solo for her added a bent knee and sharp turn of the head at the peak. However, the structure of the piece was uneven: after an opening ensemble section, the piece ended abruptly with Schwartz's solo.

The final work and the one which gave the program its title, "IN under & Through" by Hope Boykin of Alvin Ailey American Dance Theater, seemed refreshingly apart from the rest of the program. It retained the fearful, restless tone but with a more contemporary, detached sensibility. In sweatshirts and leggings in shades of gray, the dancers, thankfully well-rehearsed in this piece which so required it, rushed at the audience, dodged one another, and fired off rapid sequences of gestures in unison.

I've skipped over the penultimate work until now: Sharon Marroquín's poignant solo tribute to Rodriguez, "For You Lucia," was the only one of the three pieces dedicated to the late dancer that did not veer toward a literal account of the accident. However, it was also the most transparent. There was no question that Marroquín's character was Marroquín experiencing the torment, restlessness, fear, and anger of the shocking and inexplicable loss of her friend. There was no question that when she wrapped one arm behind and around her waist – a gesture so simple, it could seem slapstick if she hadn't just allowed it so tactfully – she both felt and yearned to feel her friend's presence. It seems that down at the level to which Marroquín digs, there is not even a chance of encountering a cliché. Her skill and dedication to living movement, as well as her own gifts as a dancer, her supreme musicality and sinuous control, place her in a level above the rest. She is a treasure.