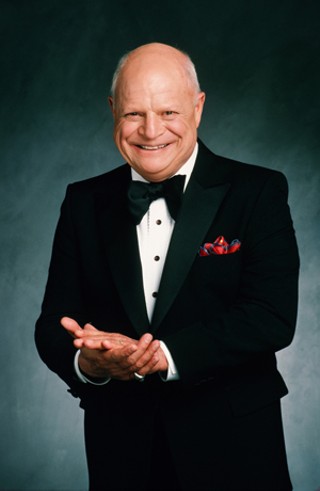 In the early 1950s, the Wayne Room, a D.C. strip joint, promoted a budding comedian from Queens as Don "Glass-Head" Rickles (referencing his breakout routine set inside Peter Lorre's noggin, where Rickles melded talking with the audience with his now signature off-the-cuff sarcasm). Later, friend and überbooster Frank Sinatra nicknamed him "bullet-head," and now a new generation of wee hockey pucks knows the legendary zinger slinger from the Toy Story films as the voice of Mr. Potato Head. Perhaps an apt moniker today should simply be "The Headliner." With more than a half-century in show business, the 83-year-old Emmy winner, World War II veteran, and graduate of the American Academy of Dramatic Arts still absolutely kills on stage and is second only to death as the Great Leveler (but admittedly, Rickles has way better timing). Audiences still lap up the put-downs. Prior to his two shows at the Paramount Theatre, Mr. Rickles spoke to the Chronicle from his home in Los Angeles.

Austin Chronicle: How do you feel about the "insult comic" label that you got tagged with?

Don Rickles: I overcame that. It used to bother me in my younger years because it always sounded like some mean-spirited guy, which I certainly wasn't. But it was a great thing for me that I overcame that image of the insult guy who's mean or something, and Johnny Carson named me "Mr. Warmth," and that's what I've been using for years now. And it really is all about me. In other words, it's a joke when I say "Mr. Warmth," but the idea is that I'm never mean and I give everybody a fair shake, that they don't walk out saying, "This guy's a real Mafia" or something. And again, you know when you're different you can't please everybody ... but the idea is to get 90 percent in your corner.

AC: The thing that really blew me away from your memoir involved your friendship with astronaut Gene Cernan and the last manned moon landing, Apollo 17.

DR: Somehow Gene and I connected. And [laughs] the funny part, he came to L.A. to visit us, and we were going to have dinner one night, and I had a Rolls Royce in those days, and I couldn't get it started, and I said, "Gene, can you get this thing going?" And he lifted up the hood, and he futzed around with it for about 10 minutes, and he said, "Gee Don, I can't fix it." And I said: "You know, you're a joke. You can go to the moon, but you can't fix a Rolls Royce." Of course, I made a big joke out of that. But he became very wonderful to me, and in fact he took the tape that I made with him to the moon. It wasn't a tape you'd show to your grandma or your mother; it was strictly a stag kind of thing for those guys in the capsule – kind of personal and funny, and they loved it. And I was very happy to be able to do it.

AC: That's historic! I don't know if any other comedian can boast slaying an audience on another celestial body.

AC: Could you share one of your favorite memories of Mr. Sinatra?

DR: Well, the most outstanding thing was Ronald Reagan, rest his soul, was going to be inaugurated for the second time in Washington, and I was in Hawaii with my wife, and Frank called up and said: "Don, get packed and get to Washington. You're going to be on the show with me for the inaugural of Ronald Reagan." I said: "Oh, come on, Frank. They're not going to listen to me with my kind of style of humor. They'll be a wreck." [Sinatra said,] "No no no, I went to the Cabinet, and they said, 'No, we can't have Rickles, we don't know what he's going to do.'" And he said, "Well, if you don't have Rickles, you don't have me." And that was the truth because of his loyalty to me. And sure enough, I came to Washington, and they said, "What are you going to do, Mr. Rickles?" And I said: "I don't know. I'll get out there and do it." And they were a basket case about that, but they accepted it, and I went out and did one of my best shows for the president.