A quick-tempoed, caricaturish style serves Thornton Wilder's play well most of the time 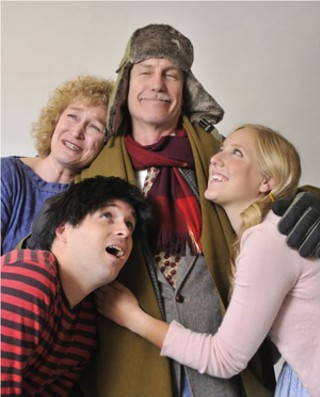 The Vortex, through Dec. 5

Thornton Wilder, author of Our Town, a perennial high school favorite, penned The Skin of Our Teeth way back in 1942 and won the Pulitzer Prize for it. It certainly wasn't the first play

to break through the imaginary fourth wall created by the early 20th century American penchant for verisimilitude and realism, but it wouldn't be surprising to find that it was one of the first plays to actually have characters walk through that fourth wall and interact with the audience.

Finding that it was one of the first to perceive history as occurring in cycles wouldn't be surprising either. Wilder seems to see historical events all happening at once, as the play opens in the suburban New Jersey home of the Antrobuses. Mr. Antrobus, the inventor of the wheel and the alphabet, among other things, is having trouble getting across the Hudson to his home because of an encroaching glacier; meanwhile, Mrs. Antrobus is busy dealing with the mammoth and the dinosaur who want to come in from the cold, not to mention all the vagrants, including Homer and Moses, who want warmth and food, and her two children: Henry, who has a troubling mark on his forehead and has gotten into trouble for killing his brother, and Gladys, who refuses to maintain propriety by keeping her skirt down.

As you can probably tell, Wilder utilizes a comedic style, but his intent is deadly serious. Antrobus can't keep his hands off women, no matter how dedicated and loving his wife might be. Gladys can't keep from getting pregnant, no matter how often her mother tries to keep her pure. And the people of the world, it seems, can't keep themselves from persecuting, killing, and committing genocide over and over again.

One thing that director Norman Blumensaadt gets very right in this Different Stages production is the style of Wilder's play. From the very beginning, when the announcer comes out and delivers the News Events of the World, accompanied by a PowerPoint slideshow on a screen above his head, the tempo is breakneck, and it only increases when Amy Lewis, as the seductive maid Sabina, enters. The actors as a group seem to approach their roles as caricatures, which only serves to heighten the comic feel of the production.

But while this quick-tempoed, stereotypical style serves the play well, it also seems to carry over into those moments when the actors have to step out of the play and deal with various "real" problems Wilder has scripted into the production, like an actor not wanting to play a certain scene. Michael Hankin as Mr. Antrobus is most successful in playing these dual realities. His Mr. Antrobus is a narcissistic blowhard of the highest order, and when Hankin is required to step out of the reality of the play and into the reality of the production, he looks and sounds like a normal, albeit frustrated, everyday actor. While seeing both sides of Wilder's cyclical story played effectively would have been nice, it's still nicer to see Different Stages revive yet another classic, influential, important play, especially one so concerned with a world that seems always so close to slipping over the edge of oblivion.