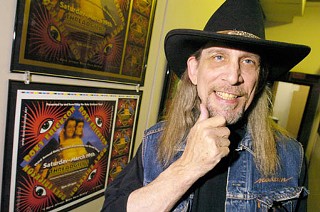 Another member of that legendary creative crew who helped fuse the worlds of art and music in Austin has painted his last canvas. Bill Narum, who created many a poster for the Armadillo World Headquarters as an artist with Sheauxnough Studios in the Seventies and who developed the distinctive visuals of That Little Ol' Band From Texas, passed away Wednesday, Nov. 18, at his home east of Austin. He was 62. Apparently the victim of a heart attack, Narum died as he lived: in his studio at his art table. In his early 20s, he helped give Houston a little counterculture cred with striking illustrations for the underground paper Space City News. By the time he relocated to Austin, the town of his birth, a few years later, Narum was applying his extravagant graphics sensibility to posters for music shows from Bill Monroe to Captain Beefheart, Ravi Shankar to Humble Pie. And his friendship with guitarist Billy Gibbons led to Narum becoming the artist of choice for ZZ Top, for whom he produced cover art for albums, murals adorning the trio's fleet of semis, and the stage design for the 1975-76 Worldwide Texas tour. In the Eighties, his GO-GO Studios provided posters, logo designs, and album art direction for the likes of Doug Sahm, Nanci Griffith, and Stevie Ray Vaughan. In recent years, he also worked to celebrate and preserve the creations of his fellow Austin artists as the president of the board of the South Austin Museum of Popular Culture, where he was honored with his own four-decade retrospective, "You Call That Art?" in 2005. For more on Narum's outstanding art and legacy, see Margaret Moser's appreciation, "Bill Narum: We Call That Art," on Chronolog, and an announcement in "Off the Record," p.65, with information on memorial services. He will be missed.