Before Glenn Close lusted after puppy fur, before Walt Disney ever put a spot on an acetate cel, there was a book by Dodie Smith that told of courageous canines Pongo and Missis fighting to rescue their pups from the evil clutches of dognapping Cruella de Vil. That is the starting point for The 101 Dalmatians Musical, a new stage adaptation, with book by B.T. McNicholl (Billy Elliot the Musical) and music by Dennis DeYoung of Styx. "Everything we've tried to do has been connected somehow to honoring [the book], coming up with a show that Dodie Smith would have appreciated," says director Jerry Zaks. His team has taken a dog's-eye view of the tale, with the world scaled to the actors playing the Dalmatians (in spotted street clothes; no Cats-esque fur suits, thank you very much) via forced perspective sets and by having actors cast as human characters wear 15-inch stilts. Plus, 15 real Dalmatians – rescue dogs, specially trained – perform at the end of each act. Launched in Minneapolis in October, the musical is making the sixth stop on its national tour at the Long Center. Multiple Tony Award-winner Zaks knows the venue well, since that's where he prepped last year's revival of Chazz Palminteri's A Bronx Tale for its national tour and Broadway run. By phone, he explained how it's been going to the dogs.

Austin Chronicle: Not to tell you your business, but there's an old showbiz saying about working with children and dogs.

Jerry Zaks: Yes, I was living dangerously, I suppose, but it's all worked out. Happily, the dogs are very cute. They're very sweet. And the kids have been very, very focused and dedicated. But yes, it's dangerous territory, my dear. Very dangerous.

AC: As if working on a new musical with a large company, including all those kids and live animals, wasn't challenging enough, you've put half the cast on 15-inch stilts.

JZ: I know, I'm asking for a lot of trouble. But I think it's paid off. We had to do a lot of planning, obviously, and a lot of preparation. We had five and a half to six weeks of rehearsal so that the people who had to be on those stilts could train on them. It's really like an athletic event for them. They had to get to a point where they're moving unself-consciously and safely and securely. The most uncivilized part of all this is, in any other situation I would have been able to have three weeks of previews where I could continue to work on the show. [We had to open] in Minneapolis with what was essentially our first paid performance. So I continued to work on it as much as I could over the next three weeks.

You know, stage time is not like real time. Stage time is measured by the rate of new ideas. In a musical, you can feel when any given idea has outstayed its welcome and not been trumped by a new idea in the storytelling and the music and whatever. And that's something you need an audience to do. That's why I plan to be in Dallas following the Austin run. The work continues.

AC: What did you learn from the Minneapolis and Atlanta audiences? JZ: The audiences there told me when a dance number was long enough, when a scene was too long. You can feel when an audience is really involved and eager to see what happens next and when they're tolerating the material. I learned where I had to continue to edit. In the middle of "One True Love," which is a song that Perdita sings about her lost husband and family, there was a dream ballet that depicted that event of her family being ripped away from her in dance. And that's what she was doing in the lyric of the song, so basically we were doing it twice, and it took me seeing that in front of an audience to understand that. I wasn't able to make that judgment in the rehearsal room. The audience, goodness – their reaction tells you everything. I love standing behind the audience. It's very easy to feel when they're genuinely enthusiastic and engaged or being polite. And I don't like polite attention. I don't care for it in the theatre.

AC: You're working on a real book musical, not a jukebox thing. You're taking it all over the country on a long tour. Seems very old-school.

JZ: I love to do it all. It's a very – I don't want to use "conventional," because that sounds pejorative, but it is a traditional musical in the sense that the songs are integrated into the story and help move the story forward and accent it and heighten it in the way good music does in a musical, and I love that. Listen, I fell in love with the theatre seeing Wonderful Town, and the joy that elicited, that's motivated most of what I do. I want shows to make audiences very, very happy that they've been in the theatre. And Dalmatians certainly fits that bill. 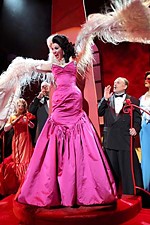