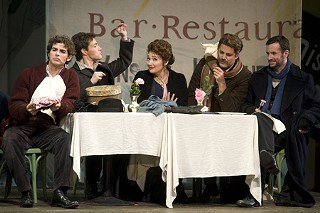 La Bohème is the rare opera that captures audiences over and over, regardless of repeat viewings (this was, at quick count, my eighth). From Giacomo Puccini's sweeping romantic

score to the timeless story of youth, romance, and freedom, something about this work struck a chord more than a century ago, and it continues to resonate today. On this temperate night, a couple thousand Austinites buzzed their way into Dell Hall for this much-anticipated opener to the Austin Lyric Opera's 23rd season.

From the very first moments, it was clear there was much reason for the buzz. Bravo to Stage Director Garnett Bruce for helping his performers capture not only the whimsical and tragic natures of their characters but also the great ease with which the set and props become playground for effective storytelling through movement. This was among the most natural and believable casts I've yet seen in an ALO production, backed up by the fine accompaniment of maestro Richard Buckley's orchestra.

The two leads, Dina Kuznetsova as Mimi and Sébastien Guèze as Rodolfo, had some trouble settling into their roles. Guèze is a talented performer with a dynamic stage presence, but he had some recurrent pitch issues in the first two acts; Kuznetsova, too, took some time to warm up to the challenge of Mimi's soaring emotionality. By the third act, though, their performances gelled. As Mimi, propped up in Rodolfo's arms, closes in on her death, Guèze and Kuznetsova's tender duet rendered prior inconsistency moot, bringing tears to many.

As the opera's power couple, the tumultuous Musetta and Marcello, Sari Gruber and Craig Verm were tremendous throughout. The role of Musetta, the opera's spitfire, calls for much more than your typical diva histrionics. Musetta is as much a bohemian as Rodolfo or Marcello but must straddle the competing landscapes of kept woman and bohemian muse (where her true character thrives). Gruber nailed this dichotomy, bringing comedic grace and vulnerability to the role, as well as glorious vocal talent. Verm, in his ALO debut, met Gruber's challenge with an assured, hearty performance, capturing Marcello's jealousy, wit, and pathos with an impressive artistic agility.

The only oddity of the night was the set treatment for Act II's street scene, a well-intended mosaic of art nouveau advertisements from the era, dropped in at different levels to create the scene around the infamous Café Momus. Unfortunately, perhaps because of their omnipresence in modern decoration (thanks to World Market and Pottery Barn), the result created visual distraction in a scene that already had a feast of activity on stage. For the opera's set designer, however, this is in essence a compliment by juxtaposition. For the other three acts, the stage was set beautifully, creating such a believable late 19th century Paris that upon the arrival of the impressionist street scene, I yearned for the gray, gritty realism of the city in winter.

The performance was also the setting for ALO's annual ball. At first intermission, General Director Kevin Patterson took the stage to announce Champagne for all, along with chairs Amelia Bullock and Mayor Lee Leffingwell, who surprised the audience by revealing himself as the drum major on stage in the previous act. Whether in jeans or a tux, no one complained about the bubbly. It was a refined, fun, and satisfying gesture – all qualities that described the performance around which it was orchestrated.