First look at a new stage 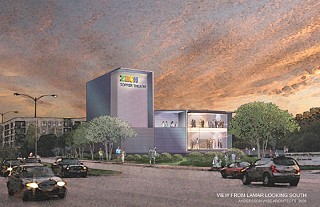 So what will the third theatre in Zach Theatre's burgeoning South Lamar and Riverside compound look like? The company gave us a sneak peek last week with the release of two exterior images by Andersson-Wise Architects. The building is oriented to the west, facing the current main stage, the Kleberg, and the image of the front shows a lot of glass encasing the two-story lobby, with the rest of the space sealed in clean, boxlike forms of composite concrete and blue-gray brick identified in the press release as Swiss Pearl. Playing off against the cool modern geometrics will be even more natural greenery than the site currently contains; the architects plan to add more than 80 trees around the building. The second view, from the northeast, shows some of the glassed-in lobby views that open toward Lady Bird Lake, with a roughly four-story fly tower at the rear of the structure, backing up to South Lamar. The theatre, which will be named in honor of local philanthropists Mort and Bobbi Topfer, is described as seating 420 patrons – fewer than the 500 originally planned for but still considerably more than the Kleberg's 230 seats, and the overall square footage, 29,700, is a major bump up from the older theatre's 8,000. With $16.3 million of the estimated $20 million cost already raised, $3 million of which was secured in the past year (during, it's worth remembering, a time when the economy was in its worst shape since Zach was founded 76 years ago), theatre backers are confident of a groundbreaking in 2010 and a grand opening in 2012. For more information, visit www.zachtheatre.org.