A dreamlike exhibition of memory and the continual erosion thereof 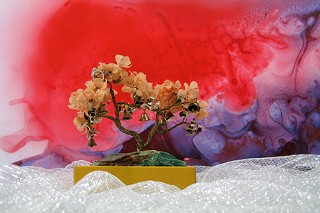 UT's Creative Research Laboratory draws the majority of its artists from, of course, the University of Texas – the students, the faculty – although occasional foreign artists or creative workers from the greater Austin community aren't strangers to the venue's exhibitions and other projects. Thus, operating out of Flatbed World Headquarters on Martin Luther King Boulevard, the CRL is home to a continuing series of experimental exhibitions, of boundary-stretchings in the name of art. The current show, "Tell me everything, as you remember it.," curated by Leona Scull-Hons (M.F.A., 2004), is one such exhibition.

Here's a show of memory and the continual erosion thereof, of the many gambits toward recording events for future access and the many ways in which those attempts might succeed or fail. Those who recall a time before easy, widespread use of recording technology might be surprised at the prevalence of video in this exhibition. Whether in motion pictures projected upon the gallery walls or upon screens embedded within those walls, there's video aplenty, of a sort distinct from what one would encounter on network or cable TV: personal, non-narrative, referring to little other than itself (unless one has the academic background to detect subtle homages to any number of previous works).

In one instance, this is no less visually attractive than the opening montages of Deadwood, say, or Firefly: Susan Chen's Thermohaline Circulation, with its fantasy landscape swarming with colors and motion. On the other hand, it's Justin Goldwater's more familiarly storylike, partially animated Dear Kenichi that communicates most powerfully here. Goldwater's short looped video presents a mixed-media exploration of his memory of a long-ago correspondence, a letter sent partly in braille from a friend overseas, the tactile dots of the manuscript blossoming with shapes and colors as reading fingers are passed over them.

But it's not all video, of course. Myranda Bair's Love Letters is a series of just that, love letters – typed to one person or another, as evocative as the best prose-poems about heartbreak and regret that you can find anywhere, arranged upon the wall like a flat parade of ex-lovers. In the gallery's farther room, John Mata has created a sonic piece from industrial foam coated with gold paint and embedded with working audio speakers. It's called Without This There Is No Paradise, and you can either look at it directly or view it (and yourself) in the nearby framed wall mirror that's also called Without This There Is No Paradise. Which, juxtaposed like that, delightfully fucks with one's mind.

There's more to this dreamlike exhibition, of course: other works by other artists. I'm offering highlights here, from my recent memory of attendance, to entice you to view it for yourself. I'm not telling you everything, but I am telling it as I remember.