... And bloodsuckers and ghosts and zombies and murderers all over our stages this week

Tweet
print
write a letter
Performers know from fear. At some point in their careers – it may be the first time they step into the spotlight, or, for a hapless few, it may be every time they step into the spotlight – these artists have to confront that peculiar situation of being before a roomful of people and having to do something, speak lines or play music or dance, without screwing up, and there can be real terror in that, my friends. They don't call it stage fright for nothing.

So when audiences say they want to be scared, these folks for whom fear is an occupational hazard are all too happy to oblige them. Come October, they'll gleefully set aside loftier aesthetic projects for those featuring ghoulies and ghosties and long-leggedy beasties and things that go bump in the night. Sure, there's a commercial incentive, just as there is at the yuletide, to take advantage of people's willingness to shell out the shekels for seasonally themed entertainment, but those performers, they're also into the whole fear factor thing.

Case in point: Award-winning director and music director Michael McKelvey, who made it his personal mission to mount the Austin premiere of Evil Dead: The Musical, a show that takes Sam Raimi's already over-the-top cult horror films to yet more outrageous heights of comic carnage by sticking them on stage stitched up with a batch of catchy, campy songs that will gnaw on your brain as surely as any self-respecting zombie. Granted, the show isn't intended to elicit screams of terror the way some Halloweenie works are, but it certainly takes its cue from ones that do, and it spills more blood per performance than a soused frau does beer at Oktoberfest. This is a show that requires elaborate zombie makeup, natch; multiple mutilations and deaths by chain saw, including decapitations; and spewing, spurting, and shooting geysers of the red stuff – enough that a section of the audience is cordoned off as a "splatter zone." And yet, despite these rather singularly daunting production demands; despite needing to concoct three kinds of blood (food dye for blood in the actors' mouths, a tempera paint mix for blood on the clothes, and cherry Kool-Aid for blood sprayed on the audience); despite having to launder three loads of costumes himself after every performance, McKelvey cheerfully took on the show.

And this October, he's being joined by more than the usual number of area artists eager to send chills down our spines. Stages across Central Texas are groaning with theatrical productions, comedy shows, and classical concerts of the weird kind, and unlike the seasonal offerings in December, these aren't just roasting the same old chestnuts from last year and the year before. Where Christmas onstage is inevitably dominated by the firm of Nutcracker, Messiah, and Scrooge, Halloween sees all manner of subjects treading the boards – vampires, witches, demons, ghosts, murderers, the undead, the mad, the cursed – and from a rich variety of sources. This year's Evil Dead: The Musical and Weird City Theatre's freshly adapted Nosferatu draw inspiration (not to mention blood) from cinema, while Austin Playhouse's The Turn of the Screw and Bastrop Opera House's Murder by Poe craft theatrical thrills from classic literature (with both adapted by Jeffrey Hatcher, curiously). Naturally, classic drama represents as well, with the ghost of Hamlet's da haunting a pair of stages: City Theatre's, in a full production of the classic tragedy, and the Curtain Theatre's, where Austin Shakespeare is serving up a bloody stew of the Bard's spookiest bits. Then there's Stephen Pruitt's TBA (of Late Night Radio), which taps an even older vein: the oral tradition, with the writer-performer spinning a few ghost stories and allowing the audience to share their own, too. This season's horror crop offers a scare for every taste, from ancient evil to modern mayhem, the unnervingly psychological to the eerily supernatural, the blood-curdling to the gut-busting. The coven of events that follow offers a bounty of frights for your delight, but you can find even more, including haunted houses, ghost tours, Halloween parties for kids and adults, and Day of the Dead events in the Chronicle's full Halloween and Día de los Muertos listings at austinchronicle.com. If you've a yen to be spooked, you're bound to find something that will raise a little gooseflesh.

Late night was always a special and slightly spooky time for listening to AM radio back in the day, and the multitalented Stephen Pruitt revives that time here with layered sound and storytelling. As it was also the best time for telling ghost stories, Pruitt does that, too, and asks audience members to bring their own tales to share. Thu.-Sat., Oct. 22-31. 8pm. Blue Theater, 916 Springdale, 927-1118. $7-15 (pay what you wish, Thursdays). www.fluxiondesigns.com/tba.html, tbaperformance@gmail.com. 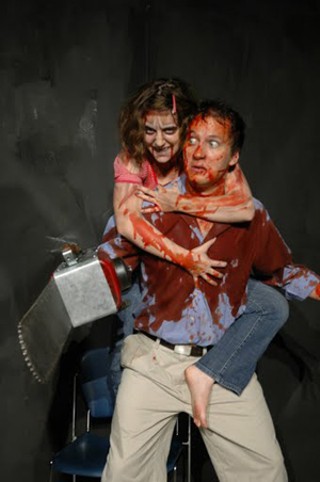 Bastrop Opera House marks the bicentennial of Edgar Allan Poe's birth with his stories "The Tell-Tale Heart," "The Murders in the Rue Morgue," "William Wilson," "The Purloined Letter," "The Mystery of Marie Roget," "The Fall of the House of Usher," and "The Black Cat" woven by Jeffrey Hatcher into a theatrical mystery, with a house full of murderers sharing their misdeeds with a woman in white, played here by Kim Deters. Artistic Director Chester Eitze directs. Through Nov. 7, Fri.-Sat., 7:30pm. Bastrop Opera House, 711 Spring St., Bastrop, 512/321-6283. $5-10. www.bastropoperahouse.com.

Henry James made a masterful addition to the ghost story canon with this tale of a neurotic young governess who's convinced that two malevolent spectres want to possess the children in her care. But are they real or just in her head? Jeffrey Hatcher has distilled the novel into a two-hander, which Austin Playhouse is staging with Jenny Gravenstein (Age of Arousal) as the governess and Ben Wolfe (Frost/Nixon) as everyone else. Lara Toner (Age of Arousal) directs. Oct. 23-Nov. 8. Thu.-Sat., 8pm; Sun., 5pm. Austin Playhouse, 3601 S. Congress, Bldg. C, 476-0084. $20 ($10, students). www.austinplayhouse.com.

If it's haints and witches and creatures of the night you want, then the Bard of Avon is your man. His plays are rife with supernatural goodness (or badness, if you will), and Austin Shakespeare Artistic Director Ann Ciccolella has conjured a number of them (the ghost of Hamlet's father, the witches of Macbeth, the fairies of A Midsummer Night's Dream, and the spirits of The Tempest) into a circle under the stars – aka Richard Garriott's Globe-inspired Curtain Theatre – for an evening of eerie pleasures. Thu.-Sat., Oct. 29-31, 8pm. The Curtain Theatre, City Park Road, just off 2222 & 360. 474-8497. $15 ($10 groundlings). www.austinshakespeare.org.

Tough love: Ophelia and her prince

Twilight by another name, the immensely popular saga of vampires and deeply conflicted adolescent sexuality turned on its pointed ear by Gnap! Theater Projects, which will lovingly mock its unique brand of "tween erotica" in an improvised show by and for adults. Conceived and directed by Austin improv maven Shana Merlin (Get Up, Girls Girls Girls). Fri.-Sat., Oct. 23-Nov. 21, 8pm. Salvage Vanguard Theater, 2803 Manor Rd., 474-7886. $10 ($5, students). www.gnaptheater.org.

'Twas a Dark and Stormy Night

The Austin Symphony Orchestra's family-friendly affair covers everything from Saint-Saens' Danse Macabre and Grieg's In the Hall of the Mountain King to John Williams' music from the Harry Potter films and Henry Mancini's "Baby Elephant Walk." Geared toward children ages 2-10, who are invited to come in costume (and so are their parents). Sun., Oct. 25, 2pm. Long Center for the Performing Arts, 701 W. Riverside, 476-6064. $12 ($8, children). www.austinsymphony.org.

Music and a Movie: Night of the Living Dead