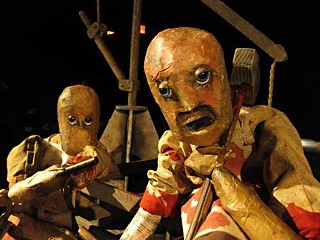 The wind blows cold in the Hog Butcher for the World. We hear its chilling moan underscore much of this Trouble Puppet Theater Company adaptation of Upton Sinclair's novel, but it signals more than the bitter gusts that cut through Chicago; it speaks to the harshness of the place in which its characters slave away: the city's meatpacking industry, where human workers are treated little better than the livestock they slaughter. They perform numbingly repetitive tasks at a reckless pace, pushed past the point of exhaustion by hard-driving foremen who care nothing for the dangers they face or crippling injuries they suffer. To these pitiless bosses who mock the workers to their faces and sack them for the slightest infractions, who force themselves on the women and whose only response to a death on the line is to bellow at another worker to get the body out of there, the workers are, as protagonist Jurgis Rudkus puts it, "little parts of a machine."

This sense of dehumanization is bred deep in the bones of this production. The first figures we see are the puppeteers, dressed identically in brown kerchiefs and aprons over dirty shirts and dark pants. Their faces, slack with fatigue, are streaked with dirt, and their aprons are stained with blood that provides the only color on the stage. They shuffle into place and manipulate the small human puppets in the performance of their assembly-line routines – push the cow in the pen, kill the cow with a hammer blow to the skull, hook the cow to a pulley, lift it, and swing it out of the pen – and their rote repetition working the puppets reinforces the mechanical nature of the actions of the puppet characters.

The puppeteers are also treated as lowly workers by the only human not operating a puppet, Zeb West's callous bully of a foreman. With his derby and cheroot, his swagger and sneer, West dominates the stage and all that's on it. Ultimately, his character has no more dimension than a melodrama villain, but he doesn't really need to here. In his streamlining of the source material and use of puppets to tell the tale, writer/director Connor Hopkins has taken the story in a mythic direction. It's less the specific exposé that shocked the world a century ago and more a universal saga of the powerless and powerful, of strangers in a strange land cruelly taken advantage of, and of one victim's painful education. Take away the turn-of-the-last-century photographs projected at the rear of the stage and the traditional Eastern European music in Justin Sherburn's striking score, and this might be a drama of contemporary immigrants caught in the grinding gears of a modern multinational. Tragically, the world hasn't changed that much.

That makes this retelling of The Jungle bleak, but it is not without humanity. And as happens with great puppeteering, it comes from figures who aren't even flesh and blood. The puppet Jurgis drops to one knee and silently extends one hand to his fiancée, Ona, who takes it. Jurgis' father, overcome with illness, falls to his knees and attempts to crawl out of the stockyards, finally collapsing into stillness. In these moments and others, we stop seeing the hands that masterfully work these figures or the immobility of their features. We see only the tender fires of their human hearts, struggling to stay lighted against a cold, cold wind.