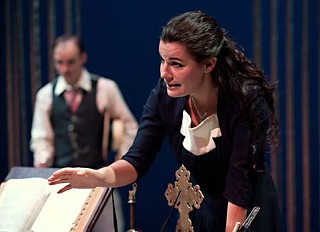 Even as fundamentalist Christian churches preach redemption of the spirit on every corner, speakeasies and bordellos cater to the desires of the flesh, emboldened by the Roaring Twenties' pursuits of earthly gratification and willful disregard for laws such as Prohibition. That makes this Southern port a fitting stand-in for the Vienna described by Shakespeare in Measure for Measure, a city where the laws against licentious behavior have gone so long without enforcement that they are flouted openly – a state of affairs so troubling to the duke that rules there that he steps away from his office and hands authority to a pious deputy who he hopes will put some teeth back into the law.

In Austin Shakespeare's production, Matt Radford plays that duke, and with his spectacles, soft Georgia drawl, and air of integrity, he might be a cousin of Atticus Finch. It's that integrity that's most critical to the character in performance, for the duke's actions are often questionable: having his deputy clean up the mess he made in governing poorly, masquerading as a priest to observe secretly his plan in action, defying legal orders, and misleading authorities and even friends to pursue a scheme of entrapment. But if he's played as a man of honor, as Radford does skillfully here, the audience will cheer on his most suspect schemes.

The miscreant he hopes to snare is the very deputy he entrusted with running the city in his absence – Angelo, a figure known for his moral rectitude – until, that is, he meets a young woman whose brother he has condemned to death for getting his fiancée pregnant. Something about Isabella awakens an uncharacteristic lust in Angelo, a lust so powerful that he makes her a most indecent proposal: to spare her brother's life if she will sleep with him. Shelby Davenport, looking like a young Calvin Coolidge and projecting the courtly restraint of Ashley Wilkes, makes Angelo seem untouched and untouchable by passion. It's an icy reserve he plays almost too well, for while he describes his carnal attraction with force, he doesn't display it very vividly, even when Morgan Dover-Pearl's Isabella – who shows the beauty and resolve, if not the cunning, of Scarlett O'Hara – impulsively grabs Angelo's hand. When she does that to the duke, Radford reacts as if receiving an electric shock. It's only when Davenport's Angelo grabs Dover-Pearl's Isabella that an erotic charge fills the room, a tension between flesh and spirit that calls to mind other godly Southern men whose earthly desires led to their falls: Billy James Hargis, Jimmy Swaggart, Earl Paulk.

In contrast, the comic figures seem "not from around here"; their characterizations feel imported, an outsider's notion of Southern behavior broadened and flattened into caricature. The exception that proves the rule is Robert Matney's Pompey. In his mustard shirt and rumpled seersucker suit, this leering, lip-licking lech is pure chicken-fried goat. When he defends one of his confederates in debauchery to Harvey Guion's gruffly proper Escalus, also in seersucker, and turns a long-winded yarn into a country lawyer's address to a jury, he comes off as a fun-house mirror version of an aristocratic Southern legal eagle, a dissolute knockoff Matlock. He is of that place and time.

And it's the connection to the setting that really informs these characters and makes this production from director Ann Ciccolella more than an above-average revival. Our intimacy with the South, with its history and attitudes, its codes and contradictions, brings us deeper into the drama and also brings it out into our world. We're reminded that just north of Savannah is a state where the current governor recently strayed beyond his marriage bed and sought to conceal his actions, and a representative to Congress accused the president of lying, an allegation that was itself lacking in truthfulness. We have yet to emerge from the moral swamps of Measure for Measure. Indeed, Austin Shakespeare's new staging could hardly be more timely.