City worker Jesse Langley scoops up a can. (Photo courtesy of Stephen Pruitt)

Virginia is riding on the back of the city trash truck; Randall is at the wheel. She hops off to pick up yard-trimming bags and throw them in the back of the truck. To do this, she has to coordinate her movements with Randall so the truck is in the right position for her to toss in the bags. Randall watches for her hand signals, but he also knows just where to stop so the truck's in the right place for Virginia to pick up the bag. And when he doesn't stop, he knows just how fast to roll the truck forward so that it doesn't get ahead of her. She's signaling. She's running. The truck's rolling. She's throwing. Can you see the dance yet?

Allison Orr saw it long ago, and for years the award-winning choreographer has been working toward creating a dance that would showcase the movements of the men, women, and machines that carry away our yard trimmings, garbage, recycling, and, yes, dead animals. And as she's done in previous projects that focused on the movements of firefighters, gondoliers, expectant mothers, Elvis impersonators, dogs and their walkers, guide dogs and their blind masters, and roller skaters, Orr has relied less on trained dancers in performance than on the individuals who go through these motions as a natural part of their daily lives. So when The Trash Project is performed Saturday on the tarmac of Austin Studios, it will be the employees and equipment of Austin Solid Waste Services that will realize Orr's choreographic vision.

Two dozen workers and 16 trucks will appear in the show, all with the full cooperation of the department – whose approval Orr worked six to eight months to secure. She's also spent the past year inside Solid Waste Services, getting up at 5am and going out on trash runs, riding on the backs of trucks and in the cabs, and running out to the landfills and to the San Antonio recycling center. But mostly she's been getting to know the employees, because for Orr, the project is as much about the people as it is the movement. She's celebrating the women and men who are undervalued and often ignored by society, even though the work they do is of vital importance to each and every one of us. Here's how she explained it in a recent interview with the Chronicle. 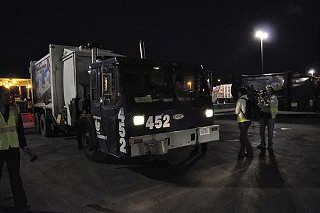 Austin Chronicle: Where did this idea originate?

Allison Orr: I've had this idea for I can't remember how long. I remember the gondola idea coming into my mind in a moment when I was lying in bed trying to go to sleep. I had an image, an actual image, of gondoliers rowing down the canal together. With this, I never had that. It's more about the people: "Of course, this would be a perfect group of people to work with, because what they do is mostly invisible, it mostly happens when all of us are at work, and we all rely upon it, but we don't know who these folks are." And there was on my part a desire to make it so that the folks who come down my street are people that I know, that have interesting lives, full lives – and now I know that they do. These are just sweet, regular people that do creative things, that have bands, that make art, that write poetry, that have families, that love barbecue, that play football, that whatever. The stereotype that somehow somebody driving a trash truck ended up there because they couldn't think of anything else better to do is just not true. It's just not true in any way.

You don't grow up saying you want to be a trashman. Who does? Well, actually there are lots of 5-year-old kids who want to be a trashman, right? But it's not a job that most of [the people doing it] probably thought they would end up in. Some of them, it is passed father to son; there are multiple generations of people who have worked with Solid Waste for many years and are still in the department. A lot of them started as truck drivers driving big trucks, and this is a more stable and regular job than working for, say, a beer company or a milk company. It's regular hours for folks who drive 18-wheelers. I was curious about what does it carry for them to do this job, like is there some stigma on them? They'll usually say they're not trashmen. That's a job, but it's not who they are. They approach their job with pride, and they want to do it safely.

AC: Did you have to persuade people that you weren't going to be making fun of them by putting them in a dance? 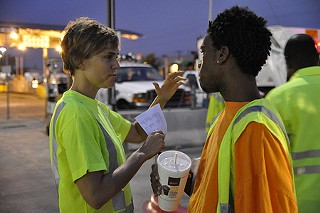 AO: I think it helped that I had already done that project with the Fire Department and had a video, and I could show it. But honestly, getting people to buy in and choose to participate has not been as hard as with other projects. They get that what they do is not an esteemed job, and they saw, "This would be a really cool way to show people what we do." I've had more interest than I have slots for people.

AC: How does their work translate into dance?

AO: It's a job that is very choreographed. They're having to judge space and time, and they're having to coordinate with each other and the machinery, and they have to rehearse and practice and become skilled at it, too. My job, by watching them for a year, was choosing carefully the elements of the choreography that reflect who they are and reflect the job.

There are certain parts of the show that I saw immediately in my mind and that worked the first time we practiced it. It's, like, working with the machinery or somebody driving a truck and somebody running alongside or working a crane. Don Anderson, who's a supervisor, when he heard I needed someone to do a solo with a grappler – it has a claw on it, and it can pick up a refrigerator, it can pick up a car, and it puts it in the back of a trailer – he said, "That's what I want to do." And the first time we did it, I said, "So I'm thinking come out, come in, be thinking dynamics, kind of build to a crescendo, come back down." And I played some music, and Don tried it, and he just got it! Calculating the energy and the timing in the way he uses that crane. And when he got down, he was beaming. And I had videoed him on my iPhone, and he said: "I've just never seen myself work the crane before. This is so great."

Speak No More: Golden Age
Neill-Cochran House Museum
The Austin Séance at the Vortex at The Vortex
Into the Woods
at Zach Theatre
MORE ARTS EVENTS >>
NEWSLETTERS