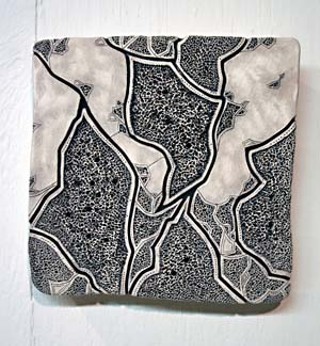 Jana Swec and Jared Theis have a two-person show of new works up at D Berman Gallery. Sometimes in a two-person show, the curator will pair contrasting styles or perhaps artists who are friends. These two Central Texas artists had never met before this show. The harmony of their art pieces together in one room is immaculate and prescient. Both artists use pulsing line qualities and muted color schemes to create expressive pieces. They both use abstracted linear forms that are imbued with a throbbing musical force.

Theis is a ceramic artist whose work includes some found objects and many musical references. In 27 Measures, a line of black-and-white porcelain tiles stretch along a wall. The varied tiles repeated contain a dark line, some smooth white areas, and lava-rock texture. These three elements roll through the piece, giving it a pace something akin to a song. Unaccompanied is a large floor-displayed sculpture made of stained ceramics, nails, piano keys and parts, and hardware. The base is a large iron piano frame; Theis builds up coiled clay vessels that seem to grow up out of it, like a coral reef. Most ceramic artists begin forms with a coil and smooth out the lines; Theis leaves them all visible to create a snaking linear texture in these effusively tubey sculptures. Disparate materials are delicately united to create these otherworldly landscapes.

Swec's use of twisting lines works in concert with Theis' repeated coils and off-kilter textures. She exhibits an amazingly intricate series of finely lined ink drawings. In the series, old gnarled tree roots seem to morph into elephants and then back into branches. In her talk at the show's reception, Swec mentioned the "obvious" connection between rough bark and elephant skin and their literal trunks. What also became clear is that she loves elephants, their shapes and their dedication to their families. She spoke of how trees grow so slowly and that the drawings take many hours of rhythmic rendering. These trees are twisting and knotting over one another; they are dense and create a world of their own. I can look at these intricate forms for a long time and not get bored. I like getting lost in the elephant/tree forest fantasy.

Last Saturday afternoon I sat and listened, blissfully relaxed as these two visual artists performed a few songs. Swec sang without a mic, and Theis played acoustic guitar. The closing song, "Hallelujah," is one that many would recognize: Leonard Cohen, Jeff Buckley, and Rufus Wainwright have covered it on their albums. The performance gave me real goose bumps. It was just pensive and beautiful, like their artwork. Kudos go to David Berman and his staff for bringing this magical duo together in a brilliant yet subtle pairing.