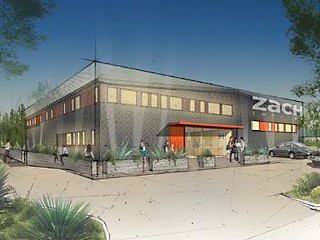 What's the first rule of the stage? No matter what disasters may rain upon the theatre or your own head, the show must go on. And so it goes at Zach Theatre with regard to the company's long a-borning building expansion plans. The economic collapse may have put the kibosh on dream projects at other arts organizations, but the folks at Zach, like true troupers, are marching forward with theirs, with the results already in evidence. Some months ago, the theatre was able to buy the former Bicycle Sports Shop building on Toomey Road that it's been renting as a third theatre/rehearsal space for four years, and now it's in the midst of, in boob-tube patois, an extreme makeover. June saw completion of phase one of the renovation of the space – now dubbed the Zach Production and Creativity Center, or Z-PACC – with a large new scenery/props shop and an expanded new rehearsal space that also serves as a creativity center for students in Zach's education programs. Phases two and three will add administrative offices, a new costume shop, and exterior finishes, all overseen by building-designer-of-the-hour Michael Hsu (Uchi, FINO, Olivia, the Belmont, Bess, La Condesa).

In tandem with that, Zach has selected an architect for its third theatre, the 500-seat venue to be situated on the open land at the corner of South Lamar and Riverside. Doing the honors will be Andersson-Wise Architects, lead firm in the design of Block 21 and designers of the Trustee Hall Academic Building and Fleck Hall at St. Edward's University. Founding partners Arthur Andersson and F. Christian Wise have developed a strong reputation for considering a site's complexities and existing physical and emotional connections to it.

Of course, funding is a concern, but Zach's capital campaign has been buoyed of late with gifts of $250,000 from preeminent cultural philanthropists Joe and Teresa Long and $25,000 from the Broadway-based Shubert Foundation, which is dedicated to supporting the nation's professional theatres. Chairing the capital campaign will be commercial real estate developer and Zach board member Tom Terkel. For more information, visit www.zachtheatre.org. 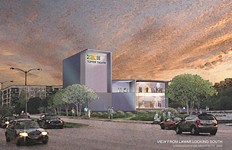 Austin Museum of Art: The third way, explained
AMOA's new proposal for a new Downtown home is dramatically smaller than the last, but that's by design