Amy Grappell's video installation Quadrangle is part of the latest exhibition in the annual "New American Talent" series at Arthouse. It's a short and jewellike work of cinema, 20 minutes' worth of fine camerawork in which two separate interviews are arranged, with embellishments of still photography, into a dynamic diptych that often displays both interviews simultaneously, their timing set to provide complementary silences and dialogue.

The interviews are with Grappell's parents, Deanna and Paul, now long divorced, about the years in which those two became involved with another middle-class suburban couple while Amy and the other kids were growing up. Involved: emotionally, sexually, cohabitationally.

It was, you know, the Sixties.

"I wanted to talk to my parents, to do some research, because I was thinking about doing a screenplay based on our story," says Grappell, whose first film was the narrative Shady Grove (1997), a sort of love story set in Austin and New York, and whose most recent film, the documentary Light From the East, was featured at South by Southwest in 2005. "But the initial interviews went well – my parents' story is kind of stranger than fiction, and they were very generous about sharing it with me. The person who shot it is Christian Moore, and we've been making films for years – we've worked together on pretty much every film project I've done, and he knows my parents well, so we were able to be with them in a very informal way. And I worked with a wonderful editor who recently graduated from the UT film program: His name is Aaron Raff, and he's been working with me for the past year."

But Quadrangle is no rendering of a screenplay, nor even a long documentary.

"As I was researching, shooting, and looking at the material," says Grappell, "it just seemed to take shape – as more of an art piece than a documentary at that point. So I created this piece as a video installation with a museum setting in mind, but I think the diptych structure could be applied to a longer documentary as well – because it's not used in an arbitrary way. I'm not a big fan of using tricks like that; I've almost never seen a diptych that I thought was necessary or had a real purpose in terms of the story and how it unfolds. But with this one, I think it allows two very different, definitive points of view to overlap – which allows the viewer to make up their own mind what they think about the story."

And what do her parents think about the piece?

"Well, initially they were a little worried, but now that they've seen it, I think they feel good about it. They seemed surprised and actually pleased with the piece – because it's pretty even and balanced, because of the way their story's told. I don't think that anybody looks like the bad guy. I think they were a little concerned about that before they saw it."

"New American Talent: The Twenty-Fourth Exhibition" is on display through Aug. 23 at Arthouse at the Jones Center, 700 Congress. For more information, call 453-5312 or visit www.arthousetexas.org. Moving Pictures
Twenty years on, more than two dozen filmmakers pay tribute to 'Slacker' and a city in transition TV Eye: Who's Sunny Now?
Matthew Perry, funny if not quite sunny, returns to TV 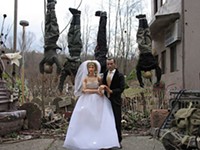