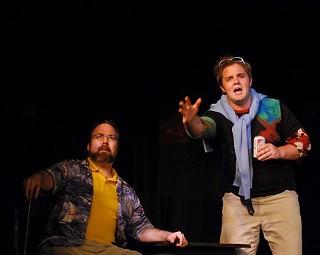 Richard Brinsley Sheridan seems like a bloke with a well-developed sense of humor, but he might be turning over in his grave over Weird City Theatre's current production of his famous comedy, The Rivals: It has been given a 1980s Brat Pack-style makeover.

Scene changes occur to the dance-inducing likes of Huey Lewis & the News' "The Power of Love" and Erasure's "A Little Respect." One character zooms around on roller skates. Others sport tights and leg warmers and sunglasses. Though the production doesn't credit any writer save Sheridan, the text has been significantly altered to accommodate the new setting. "Dickweed," "cougar," and "megahoser" are certainly not to be found in the original script. A couple of scenes have been almost entirely rewritten, but more work seems to have gone into the cosmetics of the makeover than the logic behind it.

The Rivals is a comedy of manners. Its farcical storyline depends on mistaken identities and miscommunication. The characters' lives are woven together through arranged marriages and duels. Trouble is, arranged marriages and duels make next to no sense in 1980s America. The teens who were wearing oversized sweatshirts and Members Only jackets were not bothered by those particular concerns. Fortunately, Sheridan's characters are timeless enough to shine through the nonsensical context. Two of Sheridan's best creations are Mrs. Malaprop and Faulkland. Mrs. Malaprop is a woman who believes herself to be of excellent breeding and an appropriate level of education, but via the misuse of words, she manages to butcher nearly every sentence she speaks. Faulkland, a similarly fault-ridden creature, is his own worst rival in love. He is so plagued with doubt and suspicion that his faithful Julia can in no way convince him to trust her. The Rivals is a pleasant compilation of shenanigans, social satire, and happy endings.

Weird City Theatre's production does not come together well. John Carroll's direction lacks subtlety and spirit. The choices and the effort ring hollow. The language of the play – altered as it is – is not handled terribly well. The words are either rushed or delivered with such gusto as to be rendered unintelligible. As Sir Anthony Absolute, Robert Berry is the worst culprit of the latter, practically shouting his lines. The central comedic figure, Mrs. Malaprop, is a challenge of a role, for one must seem austere and authoritative while being ridiculous and errant. But in this production, Jenni Bauer is unable to give Mrs. Malaprop her due. Bauer appears uncomfortable on stage, and her movements and deliveries are too self-conscious. Several of the performers are capable actors, but their performances feel lazy, as if Carroll didn't push them to work beyond the obvious. Though Sheridan's world is irreverent, there is no reason to treat his characters like foot-stamping children or bored frat boys; they can still be fully fledged. The most committed performance and the best handling of the language come from Kevin Gouldthorpe as Bob Acres. He performs with a level of specificity that is lacking in the rest of the show. Weird City Theatre does manage to nail the Eighties look, but no costume designer is credited.

Recontextualization is common in contemporary stagings of well-worn plays, but in the case of this production, the new context doesn't ring true. You never saw a John Hughes film end in a duel. Perhaps the oddest offense is the altered language. "Dickweed" and "scumbag" are just much less interesting than Sheridan's own invention of an "odd kind of a new method of swearing." Bob Acres provides reams of amusing slang, spouting phrases such as "Odds, whips, and wheels!" or "Odds, triggers, and flint!" throughout the show. In the end, Weird City Theatre's The Rivals has plenty of fun but barely any depth, and Sheridan's writing suffers because of it.