For a while, at least, no one home

Tweet
print
write a letter
Like the city itself, the arts scene in Austin has not been hammered by the current economic downturn quite as badly as those in other parts of the country. That's not to suggest there's been no pain here – there certainly has – just that it's been measured in terms of individuals rather than institutions, budget cuts and layoffs instead of major companies or museums permanently closing their doors. The latest example: The experimental exhibition space testsite is closing its doors – not forever but at least for the remainder of the year. The current show, "testsite 09.3 ~ Common Sense: Sheila Pepe & Elizabeth Dunbar" will remain open through July, but after that the two-story home in the Adams-Hemphill Park neighborhood goes back to being just a home for the foreseeable future.

With it goes a unique venue in the city's visual arts scene, an exhibition space that doubled as a studio, with contributors creating art in that venue for that venue, but more significantly, one that paired artists with curators or art writers and allowed them to develop a project in close collaboration rather than one after the other. That sort of boundary-crossing enterprise, which has yielded a number of dynamic works in the past six years and which we could use more of, will be hard to lose. Now, on the website for Fluent~Collaborative, the nonprofit venture that sponsors testsite and the online contemporary art journal ... might be good, ...mbg Editor Claire Ruud is upbeat, referring to the closure as a sabbatical from which testsite will return. Even so, there is a casualty in all this: Kate Watson, who has served as testsite coordinator and ...mbg associate editor for the past year.

"I really appreciated Kate as a colleague," says Ruud. "Her energy and vision brought freshness and vitality to both testsite and ...might be good. Though she'll be missed at Fluent~Collaborative, I'm looking forward to see what she does next as an independent curator, writer, and artist. She's overflowing with exciting ideas, and I'm sure we'll continue to see her curatorial projects, art criticism, and videos all over town."

Actually, her criticism may be found in these very pages, beginning with the July 24 issue. We welcome Watson's insights and hope that Fluent~Collaborative's loss may be the Chronicle's gain. 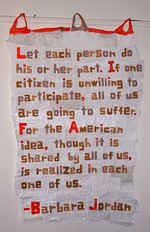 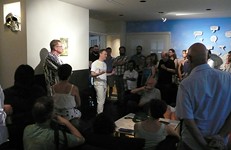 Dana Friis-Hansen
From a curatorial life to another