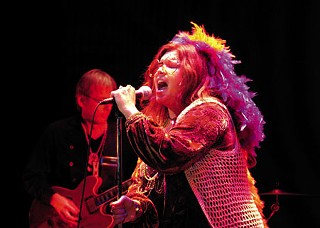 When an artist dies young, everything about her life is then viewed through that tragic filter. Every statement made or action taken acquires a foreshadowing resonance, as though the artist knew she wasn't long meant for this world. But Love, Janis tries to celebrate the life of Janis Joplin.

As in the liveliness of Janis Joplin. Her sister wrote the book of the same name, which was adapted for the stage by Randal Myler, director of Zach Theatre's current production. Laura Joplin, in an interview with the Denver Post, said of Janis' letters: "They're really fresh and spontaneous, not sifted through the gray curtain of her death. ... When you read her letters, she's alive and she's fun."

She's alive, and she's fun, and she's insecure. The letters are riddled with common human attributes: doubt, fear, the search for love and affection, the seeking of approval, not to mention the constant apologizing. The woman who wrote home was not an icon; she was a daughter and a sister. Love, Janis splits that woman into two parts: a speaking Janis and a singing Janis. The effect is like attending a concert with a story, and in Zach's production, the story is engaging, and the concert rocks.

Several things combine to make this a successful evening of entertainment. First and foremost is the jaw-dropping performance by Mary Bridget Davies (who alternates with Andra Mitrovich in the role of singing Janis). The role and the performer are perfectly matched, always an incredible thing to behold, and Davies gives tremendous energy and heart to the songs. The speaking duties – the dramatization of the letters home and some interview excerpts – are taken on by Sydney Andrews. Though she has a tendency to overwork the heartstrings, Andrews manages to bring an emotional narrative to this rock concert, and her arc, from hopeful artist to frustrated icon, is strong. An amazing set of musicians fortifies the evening, along with groovy lighting and projections courtesy of Jeffrey Cady. The letters home provide an amusing perspective on the culture of the Sixties. By the end of the evening, the speaking Janis and the singing Janis grow closer, as if, had Janis Joplin lived long enough, she might have united her conflicting facets. Janis died at age 27 of a drug overdose. A month earlier, Jimi Hendrix overdosed at 27. The saddest thing about these sudden endings, apart from the human loss, is the loss of the artists that would have been. The loss of the art they would have made as they grew older, wiser, freer.

As good as theatre gets, it rarely throws people out of their seats, hooting and hollering and stamping and bobbing and clapping. Love, Janis achieves this level of enthusiasm. Thanks to the magic of theatre and the power of a story – no matter how thin that story might be – this night becomes more than a damn fine Janis Joplin impersonation. For a couple of hours, Davies and Andrews are Janis Joplin. Love, Janis successfully unites its two versions of Janis – the Janis whose performances were remarkable and the Janis whose struggles were common. The show is both a tribute to Janis Joplin and a demonstration of the impact she had on the world. Davies couldn't turn in this killer performance of a killer female singer if it weren't for the real Janis and the way her talent changed the music industry. Through the memories of those who loved her and through the pursuits of those who were inspired by her, Janis Joplin lives.