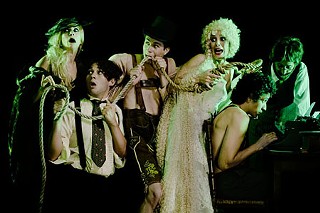 My cat Behemoth is currently up to no good. Like his namesake from Mikhail Bulgakov's novel The Master and Margarita, he is a malcontent, an unpredictable troublemaker. And while

not every Bulgakov character is a walking, talking, devil-spawn feline, his side characters share a similar wildness, excess sprung forth from caricature, an iron-fist certainty of their absurd views.

In A Dead Man's Memoir (A Theatrical Novel), Bulgakov cast his satirical eye toward the famous Moscow Art Theatre. Tutto Theatre stages Keith Reddin's dramatic adaptation, christened Black Snow, in a two-hour whirlwind that follows beleaguered Sergei Maxudov from the inexplicable publication of his novel to its doomed theatrical adaptation.

Maxudov, an earnest novice in the Moscow arts world, is shuttled from office to office, cajoled by jealous comrades, and altogether overwhelmed by the profusion of weird, wild ones that accost him in his journey. Gabriel Luna does an excellent job of giving a likable, honest face to Maxudov, but ultimately his character is the straight man to the world so bitingly satirized by Bulgakov.

Black Snow works at breakneck speed to fit as much of its literary forebear onstage as possible, and there's nothing static about this production. The set and actors swing across the stage as quickly as the plot trundles forward and faster than Maxudov can handle. But even with the vast catalog of absurd side characters and quick tempo, the energetic ensemble still does a marvelous job of being precise with its movements.

Ensemble work is a particular strength of Dustin Wills' direction. The thing I've come to appreciate most about Wills' directorial style is his demand to be extraordinary. There are so many things that could be ordinary in Black Snow: the way a bed is brought onstage or a letter is delivered under a door or an assistant gives two lines of dialogue to his boss. Wills strives to make as many of these little things magical as possible, and those little things stay with me. Wills is well suited to Bulgakov because both make every character and detail count.

The world of Black Snow here also owes a lot to Lisa Laratta's beautiful set. A mini mountain that could be a part of Austin's own Cathedral of Junk swells over stage left, the back wall has been painted a compelling mixture of green and black, and an inescapable feel of vintage, of decaying decadence, permeates the show's design.

I remember having a distinct feeling of loss and injustice when I realized that success and talent did not have a direct relationship, and Bulgakov exploits the notion of how the wrong people in the right places can ruin, well, art itself. It's unclear whether anyone likes Maxudov's novel. It's unclear whether anyone has even read Maxudov's novel. Special mention must go out to Smaranda Ciceu for her hysterical portrayal of bumbling arts director Ivan Vasilievich, who is revered as an artistic genius but can hardly distinguish the difference between emotions and bicycles.

Black Snow is tightly executed and full of energy, magic, and laughs. Tutto and Bulgakov are a wonderful marriage of zany energy and deep meaning, and I can only hope the company goes on to tackle his epic The Master and Margarita. I have just the cat in mind.