A bureaucratic heaven, as envisioned by a couple of charming clowns, is sweet 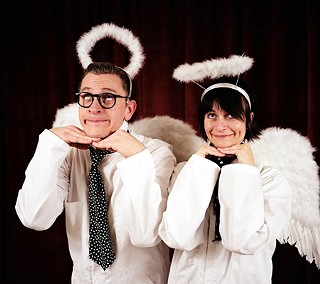 Some people believe in a heaven where the only experience is pure bliss. Others think such bliss is impossible without the contrast of mediocrity and pain. In Department of Angels, by the physical comedy duo Schave & Reilly, however, the clouds housed a bureaucracy in which an isolated office was staffed by a pair of winged creatures in white jumpsuits. Like their earthly counterparts, they clocked in for the day, succumbed to security searches, and hung their ID cards around their necks. Then they read memos and chucked them in a temperamental shredder, argued over who would do what, annoyed each other, and waited for the red phone to ring.

In the Department, though, clocking in involved more than an ID-card swipe; it required the punching in of many numbers and a handprint scan, followed by the tossing away of the whole machinery, and each employee got not just a pat-down but a pass of primatelike nit-picking and a kind of tickle treatment. The tall and straitlaced angel (Ben Schave) repeatedly tricked the scrappy and overeager one (Caitlin Reilly) in whoopee-cushion hijinks, and the simple task of writing on a clipboard presented a series of ridiculous challenges. Reilly's angel had a penchant for licking things – her scarf, the rubber stamp, the shredder's electrical plug – that irritated her celestial officemate. When the whistle signaled a coffee break, the entire time-clock ritual had to be repeated before the angels unwrapped their cigars (yup, cigars), and another whistle ended the break before they could find a light.

Back at the Department, the red phone started ringing, bringing in orders to dump buckets of peace, happiness, and love over the folks below. But the bucket o' love never reached its terrestrial intended: With Tall Angel's back turned, Scrappy Angel upended the bucket on herself. (In the program, the characters are simply called "Schave" and "Reilly.") With Scrappy Angel chasing after him with pursed lips and googly eyes, Tall Angel seemed at a loss for another solution and dipped into the bucket, too, but before they could unzip their jumpsuits, the red phone rang again: Fired. After a solemn removal of their wings and white, they put on their oversized overcoats and descended.

When a shiny Red Delicious appeared in Scrappy's coat pocket, it was apparent that they'd never seen one before. Inevitably, she tasted it, and the reason she'd been licking items became clear. Together, they devoured the apple she'd been starving for. Go figure: In heaven, she was a crazy bat with pica. On earth, she's just hungry.

Schave & Reilly, who are husband and wife and who met in clown college, are just about as charming onstage as can be. They are well-paired artists of physical comedy as well as of concept – we're not talking Ronald McDonald here. Though their work is clean enough for kids, it's timeless and layered. Their continued independent work in this art form, one that has a long, reverent history but which is often on the fringes today, is remarkable in itself. However, the pacing of the hourlong show – perhaps partly due to physical necessity and partly because of all the waiting, sitting, and repeating required by the subject matter – resulted in some drag. The staging at the Blue Theater put the audience close to the performers, and some of the cartoonish quality of their physical exertion was lost. But the DIY nature of the show, with its cardboard clouds and time clock made from a shoebox, was sweet, and the dingy, rickety surroundings at the Blue made the little drama seem all the more absurd. Some people say any experience we get on earth is all there is. So I say, send 'em in.