Are the great dramas of yore reclaiming their place on Austin's stages? 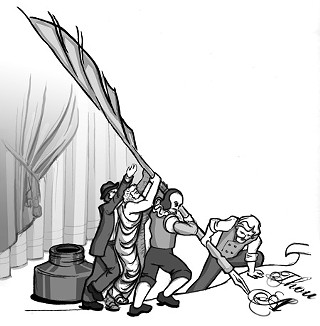 Euripides, is that you?

You've been away so long, I almost didn't recognize you. And who's that behind you? Mikhail Bulgakov? Never thought to see him around these parts again. And J.B. Priestley, how long has it been? And is that Eugene O'Neill, too? And Sartre? And Molière? And Sheridan, Coward, and Chekhov?

Seems like every time you turn around this summer, you bump into another Grand Old Geezer of Western Drama somewhere on the Austin theatre scene. As the mercury is rising to record heights, so too is the number of local productions of plays that, for lack of a better term, could be called classics – roughly double the number that were mounted from May through August of 2008. In fact, for the first time in at least a generation, the number of classics onstage looks to be outpacing the number of new plays being produced locally.

That's a fairly stunning turnaround for this community, rather like having oatmeal suddenly displace migas as Austin's breakfast fare of choice. To the extent that Austin is known for theatre, it's known for new plays. The city has been fertile ground for original dramas, I suspect, since Col. Zilker started making ice, if not before – with the occasional local play even garnering some recognition beyond our city limits (e.g., the counterculture musical/happening Stomp, aka Now the Revolution, which caught the eye of Joe Papp and played New York and Europe in the Seventies). But once three homegrown plays, in fairly quick succession, found notable success inside and outside Austin, a real surge in new play production began. The trifecta of Gertrude Stein Gertrude Stein Gertrude Stein, by Marty Martin; Greater Tuna, by Joe Sears, Jaston Williams, and Ed Howard; and In the West, by the company members of Big State Productions, proved that there was an audience for Austin-generated plays, both locally and nationally, and anyone who wasn't already an aspiring screenwriter sat down to the keyboard and began tap-tap-tapping out a script for the stage. Which companies then responded to by producing them, sometimes in new play development programs, sometimes through festivals such as FronteraFest, where playwrights could mount their work. And the UT Department of Theatre & Dance began beefing up its playwriting program and production of student-generated material. Up sprouted more and more new companies that focused on mounting original material: the Rude Mechanicals, Loaded Gun Theory, Rubber Repertory, and Yellow Tape Construction Company, to name a few. And more and more works coming out of those companies made their way to appreciative audiences around the country: the Rude Mechs' Lipstick Traces and Get Your War On, Dan Dietz's tempOdyssey, Steven Tomlinson's American Fiesta, John Walch's The Dinosaur Within, et al. By the late Nineties, the area had enough playwrights that an organization, Austin Script Works, was founded to support their activities. Over the past 25 years, new plays have gone from representing about one-fifth of the theatrical work produced in the Austin/Georgetown/San Marcos area to just about one-third – a fact that has been noted with wonder in theatrical circles across the land. This city loves its new plays.

The classics, not so much. Back in the day, the golden oldies of the stage stood on equal footing with Austin's theatrical newborns, representing about 20% of the area's annual dramatic output. But once the new-play engine began revving up, it was The Tortoise and the Hare in revival, with the classics in the role of the poky reptile left in the dust. As the percentage of new plays produced has almost doubled since 1984, the percentage of classics has slipped to just one-sixth. Out of the 200 or so shows that may be produced in this area in the course of a year, only about three dozen are typically classics – and that's using a mighty liberal definition of the term: basically, any stage play or musical 60 years old or older and any newer play based on a literary work written prior to 1950. So, even with a standard that allows Weird City Theatre's Treasure Island, City Theatre's Alice in Wonderland, Trouble Puppet Theatre Company's Frankenstein, Zach Theatre's The Grapes of Wrath, and Salvage Vanguard Theater's Iphigenia Crash Land Falls on the Neon Shell That Was Once Her Heart into the tent, the Austin theatre scene mounted just 37 "classics" between May 1 of last year and April 30 of this one. And it should be noted that 15 of those were works of Shakespeare, who tends to skew this kind of analysis. Clearly, if anybody belongs in the classics camp, the Sweet Swan of Avon does, but he's also a special case in that his works are perpetually in production and widely, too. Strip away the Shakes, and count only those works written for the stage before 1900, and the grand total of last season's stage classics plummets to 10.

Well, so what, you may be saying. If new plays are thriving and finding an audience, what's the difference whether someone dusts off A Doll's House or The Misanthrope or Every Man in His Humour for the umpteenth time? Those plays had their day.

Which is true, but with the best of those works of the past – the ones that truly earn the honorific "classic" – their day is also our day. They have within them some quality, some reflection of humankind's most enduring traits, some truth, that transcends the era in which they were created and makes them as contemporary as that freshly minted drama just opening at your neighborhood playhouse. And precisely because these works are of another era, because they have – to use a phrase that no doubt made you roll your eyes in junior English class – withstood the test of time, they offer us the perspective of distance, the long view of our race. Through them, we're better able to see what doesn't change in the human character, for good and ill, and that can hold great meaning for us as we struggle with the issues of our era and strive to learn who we are and how we want to live. To my mind, having classic plays be well represented on our local stages helps make for a well-rounded theatrical diet, is good for our cultural literacy, and helps the theatre artists who produce them exercise artistic muscles that just don't get a workout in contemporary plays, but mostly I believe they're just valuable for what they tell us about ourselves.

And that would appear to be also true for at least some of the artists taking part in this summer's spike in classic theatre productions. Charles P. Stites, who's directing Tartuffe for the City Theatre Company, first read the play during the scandals of evangelists Jimmy Swaggart and Jim Bakker and was struck, he says, "by how much those charlatans had in common with Molière's famous huckster and how similar Orgon's family was to the Baptists I grew up with. I think that Molière's story of blind faith and family has even more to say to us now than it did in 1664." Bastion Carboni, whose Poison Apple Initiative production of No Exit ends its three-week run at Domy Books this weekend, finds Sartre's drama enduring for "its philosophical relevance; it brings to light issues that, regardless of age/gender/race/religion, are dealt with by people throughout the lifespan." Will Hollis Snider, who's written a new adaptation of the Greek tragedy Orestes for Cambiare Productions, says: "The classics have survived and prospered because their themes have resonated universally. With Orestes, I have a chance to take a familiar story and adapt it to make those huge themes – loyalty to family, guilt versus absolution, and the role of faith in our lives – much more personal."

The plays that tell us who we were and who we are, that bring to light issues that affect us no matter what time we live in – they're all around us right now. But who knows for how long? Another dozen classic plays will open between this weekend and Labor Day. Perhaps if enough of us turn out to see them, if we prove that there's a new audience for these enduring works, this comeback of the classics will keep running, and the tortoise will again catch up to the hare.

The Other Summer Classics

An Inspector Calls, by Priestley, runs July 3-25 at the Vortex, 2803 Manor Rd. www.main.org/diffstages.

Orestes, by Euripides, adapted by Will Hollis Snider, runs July 30-Aug. 15 at the Off Center, 2211-A Hidalgo. www.cambiareproductions.com.

As You Like It, by Shakespeare, runs Aug. 8-30 at Scottish Rite Theatre, 207 W. 18th. www.scottishritechildrenstheatre.org.