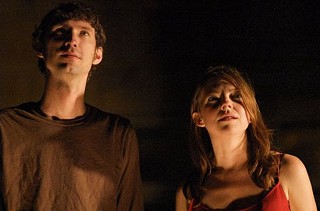 Before I tell you why I recommend the Vestige Group production of Toni Press-Coffman's Touch, I have a bone to pick. Four actors appear in the show. None of them would be considered a "professional actor" in the commonly accepted sense of the term, but at the risk of sounding totally cliché, professional is as professional does. According to their program bios, three of the actors have studied theatre in New York, at least two have university theatre degrees, and at least one aspires to teach theatre at a university level. No, not professionals in the usual sense, but each obviously aspires to professionalism. Why, then, on only the third night of their run, did they as a group seem to have so many difficulties delivering the lines? Why the stumbles and stammers and repetitions? I think I can tell you why: They didn't do the boring, quite repetitious, exceedingly difficult, slogging-through-the-mud work of memorizing the lines to completion. Not to single them out for this. I see it far too often, from professional actors and nonprofessionals alike, and I believe it's too easily forgiven and too easily forgotten. Beyond being distracting in performance, it cheapens the profession and the art, and there's no excuse for it.

Putting that aside, I recommend Touch for multiple reasons. First, for Press-Coffman's interesting and even innovative script, which combines monologue and scene work in a way I can't really recall having seen before. Second, for Press-Coffman's story about mind and spirit and love and grief, which brought me to tears early in the first act, well before this sometimes amusing, often painful, always insightful story had reached its conclusion.

Speaking of the story, you may be curious to know something about that. It centers on a man named Kyle who meets the love of his life, Zoe, in a physics class during his senior year of high school. They fall deeply in love, get married as soon as they graduate, go to college, and then – well, something beyond terrible happens, and Kyle, now an astronomer, is left alone with his stars.

Which brings me to what I most enjoyed about Touch. Or rather who I most enjoyed: Andrew Varenhorst as Kyle. It's not that the other actors have nothing to recommend them. Director Susie Gidseg cast a fine group, especially Evelyn LaLonde, who brings a deep simplicity to the role of Zoe's sister, Serena. But Gidseg's greatest asset is Varenhorst, an open, trusting actor who often does little more than simply stand in space, his hands at his sides, and speak. I don't often see such confidence in an actor. Varenhorst understands how to tell a story, a fact that comes through most clearly in the extended monologue he has that begins the show. I was enjoying it so much that I was almost disappointed when another actor made an entrance.

Two other things you might want to know about the production: Seating is limited, so if you're interested in attending, you should make a reservation. The seating is such because the show takes place in a tiny courtyard outside Hot Mama's Espresso Bar on East Sixth Street. Which may sound strange until you see Kyle look up at the sky and wonder to yourself whether he's searching for some star or for the maker of all stars.

Elizabeth Spears at the Velv
Velveeta Room
Marilyn, Mom & Me
at Mastrogeorge Theatre
Annie Jump and the Library of Heaven at The Vortex
MORE ARTS EVENTS >>
NEWSLETTERS