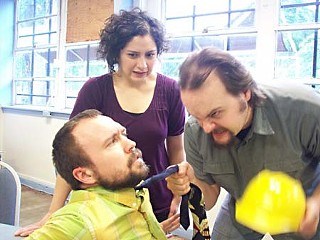 The Off Center, through June 27

Have you ever wanted to be a fly on the wall of a teachers' lounge? Taking in the gossip and overhearing what teachers really have to say about their students? Max Langert's new play,

Teacher, Teacher, billed as an educational farce, provides the opportunity to be on the inside. Langert imagines the lounge as the teachers' respite from the insanity encroaching on them – an idea nicely visualized in the set for Loaded Gun Theory's production. Piles of trash – printer parts, dictionaries, varsity jackets, cubbyholes, fans, wood scraps – box the lounge in on either side. The room, seeming as tired as the teachers, is outfitted with outdated gadgets and annoying motivational posters offering such spent advice as "Never let yesterday's disappointments overshadow tomorrow's dreams." Here, the teachers' lounge becomes a microcosm for the larger school, with the teachers bored out of their skulls and social hierarchy at play, evident in the insecurities and ridicule flung among staffers. Between brewing new pots of coffee and watching the students conduct switchblade fights, these teachers hardly have time to teach.

Langert plays with some inventive comedic devices. The school is slowly disintegrating, and a very concerned construction worker keeps placing orange cones around the teachers' lounge. Eventually, hard hats get involved. An unconscious body wrapped in plastic is shuffled back and forth. A series of red herrings finds one particularly disgruntled teacher (Travis Holmes) repeatedly being caught red-handed for crimes he did not commit. The cleverest staging in the whole piece involves a renegade school bus, commandeered by a student named Lisa, that makes a break for Mexico. Atop the bus, an insufferable Mr. Norton (Robert Deike) hangs on for dear life while still trying to bark orders and maintain control.

Teacher, Teacher flows logically, smoothly, and humorously from its premise. And the Loaded Gun Theory production executes Langert's vision faithfully. But the two halves that make this an "educational farce" are at odds; the teachers' seen-it-all attitude works against the frantic energy necessary for that genre of play. Though both production and script are competent, they rarely make for a wild ride. Langert relies heavily on the messenger device, having the teachers report on mutinies and crimes from the safe haven of their lounge – if this is a storm, we're watching the eye. Moreover, E.D. Harrelson's direction doesn't provide the relentless drive necessary to make the absurdity ring true. The pace drags and lets the audience anticipate the jokes. The performances are generally one-note. One teacher is a burnout, one a priss, one a paranoid. Only the character of Wallace, played by Jessica Medina, manages to achieve a degree of credible depth. She carries an exhausted-but-still-invested demeanor, and you believe she's been at this school long enough to know how things work. But such people are unfazed by insanity, so even as the school erupts, the teachers' lounge remains relatively calm. Only in the final scene, when the room literally begins to collapse, do we see the kind of full-fledged panic that makes for a farce.

There is plenty of merit in the idea of an educational farce. Most people know firsthand how ridiculous high school can be. Langert and Loaded Gun Theory have devised an enjoyable evening of body-shuffling, bus-riding, coffee-drinking fun. Hopefully over the course of the run, Teacher, Teacher will tighten and heighten into the zany romp it's meant to be.