Just building spaceships in the yard 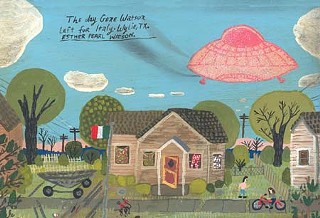 Esther Pearl Watson is in Comanche, Texas, where she's been temporarily living after her grandmother broke her hip and had to be moved into a nursing home. It was there that the 35-year-old artist finished the UFO-centric paintings for her new exhibit, "Texas Instruments," which opens Friday at Domy Books. She also got a little inspiration from her surroundings.

"For fun, the nearby town of Gustine – I think the population is like 400, something really small – they had an art contest," she explains. "Since I'm sitting in this nursing home, I decide to run a painting over there, enter the contest. The best in show was this rendering of two hands cupping an apple, and it looked like two butts sitting on an apple. I was like, 'Yes! This is the kind of show I need to be in!'"

Watson ended up winning honorable mention, but no doubt her entry stood out from the questionable still lifes. The colorful scenes in "Texas Instruments" are based on her childhood in Wylie and Sachse, Texas, just outside the Dallas/Fort Worth area. Her father, Gene, who had worked for the Dallas-based electronics company Texas Instruments, spent much of the 1980s building spaceships in the yard.

"He would quit his jobs and work at Domino's Pizza so he could have more time during the day to work on his flying saucer," she laughs. "He didn't believe in aliens; he just thought saucers were a better mode of transportation, that they were the future. He tried to get Ross Perot interested in it; he sent letters and drawings to Steven Spielberg and whoever happened to be president. No one was really ever interested in funding it, so funding came from us picking up beer cans on Saturdays."

There are minute details, like jumper cables and soda cans, peppering her small-town landscapes. Many of her spaceships are pink, a girl's-eye view of a childhood full of sci-fi movies. Watson's handwriting on the paintings provides a starting point, but she leaves it to us to tell the rest of the story. There's also a pang of adolescent awkwardness as she explains how her father promised to fly her to middle school in a finished craft.

Awkwardness informs Watson's other projects, like the comic strip Unlovable. She created its plucky, sarcastic heroine, Tammy Pierce, after finding the tortured diary of a 15-year-old girl in a truck stop restroom, dated from the 1980s. As much as Gene's oddball ideas may have embarrassed her growing up, she credits him with her approach to art. There's a pureness to her work.

"He never quite fit into society, and he didn't seem to care," she says. "In high school, I saw some of my first Raw Vision magazines and realized this is visionary art, outsider art. Here's someone building something in their yard, without hopes of getting into a gallery, just because they believe in it." 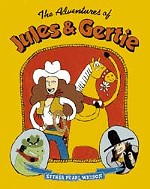 The Adventures of Jules & Gertie, and Auntie Claus