For MacDougal and Le Razer, moving bodies and music are one 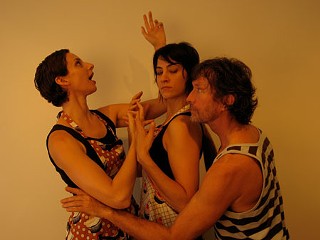 In a Saturday rehearsal, choreographer Lorn MacDougal is pondering a dance-music problem. Dancers Ann Berman and Theresa Hardy are in a tangle with dancer/choreographer/composer Alain Le Razer, who plays an aqua-finish ESP Telecaster guitar. The long legs and arms of the women are wrapped, like tentacled sea creatures, around various parts of Le Razer. Here's where it gets tricky: Hardy must position her hand on the frets, and Le Razer must move his hand downward on the strings so Berman, twisting, can play a backhanded chord. But Le Razer shakes his head: Too many hands grappling the guitar stifle its sound, so no one should place their hands too early. Then, reminds MacDougal, Le Razer must not show he anticipates being pushed to the floor. As he falls, Berman kicking him on the way down, he must smoothly transfer the guitar to Hardy and Berman, where again they share it, Hardy holding the neck and Berman playing a chord.

Though just a moment from MacDougal and Le Razer's in-progress piece – working title, "Party of Three" – for the Big Range Austin dance festival, it's representative of the task they've assigned themselves – fuller integration of music, movement, and space. The duo, partners in life and work, have collaborated on dances, films, and theatrical projects since the 1980s. After nearly a quarter-century in New York, they relocated to London, where MacDougal had an offer to head Transitions Dance Company, and then three years later to Amsterdam as free agents. The end of the Bush presidency coaxed them back to the States in 2008, and a friend recommended Austin's progressive nature and "high vibration." MacDougal, foreseeing a possible end to her lifelong dance career and working toward certification to teach Pilates, was "awfully happy to be pulled back into the dance world" when the University of Texas and Austin Community College offered her dance department courses. (She'll teach full time at UT in the fall.) Le Razer, who has degrees in painting, sculpture, and film, as well as training in mime, dance, and music, anticipated a music-centered existence and a cheery populace with an "interest in the peripheral." He explains carefully: "There is always a point, after you've been in the Old World, that you seek the enthusiasm of the New World."

They found this fervor embodied by dancer Berman, whom they met at Big Range 2008, when she presented her marvelously funny "Chicken Complex." "She represents to me the kind of quirky side of Austin, this rebellious side, this kind of upbeat, funny side," says Le Razer. "It was, in a way, that kind of spirit that we wanted to develop." MacDougal and Le Razer quickly recruited her to work on a film project, and, in a search for extras for that same project, they came across Hardy. The two dancers are strikingly similar in appearance – of equal, generous height, with long limbs and cropped, brown hair, and even similar facial features – so when they all got together in the studio for the Big Range piece, MacDougal found it almost necessary to give Berman and Hardy some symmetrical movement, to play off that eerie twin-ness.

"Party of Three" is a departure from the film work Le Razer and MacDougal are known for. The piece is experiential as well as experimental, and each dancer is required to play music onstage. Berman brings talent on the bass left over from her college rock band – she'll gleefully point out the bloodstains on her instrument, from her injured fingers at a particularly hardcore gig. Hardy, after an unsuccessful trial on the violin, is on the drum machine and tambourine, and both contribute percussive vocals. Le Razer plays the guitar onstage and composed the recorded music over which the live stuff is layered. "The music itself is absolutely made for one single purpose: move bodies," he explains. "It is made for the ear, but it is really meant to get them to cover space and to be percussive in their movement."

MacDougal, who uses Le Razer's music in her courses, agrees that there is "something visual about his music." I get the idea that though these collaborators have intrinsic knowledge of each other's work, they push their ideas to a point where neither knows exactly what will happen. "The festival is an opportunity to experiment, so that's what we're doing," says MacDougal. 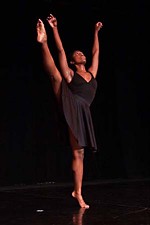 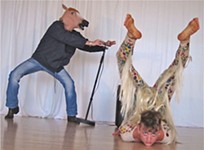 'All Things Animate'
Three dimensions of motion in two