The Vortex's latest theatrical immersion in myth sinks you down 20,000 leagues 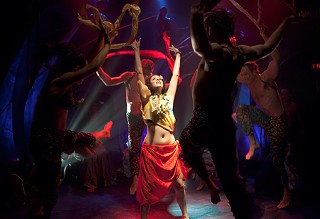 The Vortex, through June 6

Like tides, those messages flow in and out of Oceana, Vortex Repertory Company's latest immersion in folklore and myth.

The first drives the story, as a girl is plucked from the Gulf of Mexico shoreline and escorted by merfolk through the seven seas. They're acting on orders from the Yoruban deity Olokun, who believes this young mortal may be the savior of the world's waters, which have been thrown out of balance by both the ravages of men and the appetites of gods. But as the girl is guided from ocean to ocean, soaking up knowledge of the seas through the legends of cultures around the globe, she repeatedly encounters evidence of the second: In the ocean's vast depths, a human may drown or be crushed, Arctic waters can freeze the blood, and storms and floods can wipe out life in water or on land – especially if they're directed by a deity with a destructive bent. "Never turn your back on the sea," our young heroine is told, and the lesson has a double truth: Don't neglect this precious source of life, and don't imagine its elemental forces are under your control.

Reclaiming ancient wisdom for contemporary audiences is as much a part of Oceana as it was of Dark Goddess, Trickster, and Holy Well, Sacred Flame, Vortex's sister ventures into the lands of myth and lore. And like those productions, this one uses theatre's devices to heighten our appreciation for the mythological figures portrayed therein and the lessons in their stories. The giant, curling fronds of Ann Marie Gordon's set and undulating illumination by Jason Amato, which gorgeously mimics the swirl of light through moving water, sink us down 20,000 leagues. The steady sound of bubbles provided by designer Roy Taylor and the fluid movement of the performers – most notably Gabriel Maldonado as Olokun, so graceful he seems to be swimming in air, and the foursome playing the Mer, who swing elegantly on two large iron rings that hang in the space – add to the liquid ambience, such that we clearly understand the wonder expressed by Betsy McCann's Gulf Girl as she tours the undersea world. Content Love Knowles' score supports this aquatic environment, not so much in overtly evocative ways but in a range of moods, from the even, sustained harmonies suggesting the serene Arctic underworld ruled by the Inuit goddess Sedna (a wounded and wry Elizabeth Rast) to the passionate, pounding percussion that accompanies a dance by the Hawaiian fire goddess Pele (Karina Dominguez, divinely prideful) to the tuneful, Forties-style ditties reeled off by the Greek-chorus-like Sirens (Kimberly Pruitt, Jennifer Coy, and Brenna Pritchard, making like the Andrews Sisters on the half-shell).

As engaging as this watery domain is, however, the current carrying us through it doesn't always flow smoothly. It's suggested time and again that Gulf Girl may be the one to save the seas, and her voyage of discovery is structured as a classic hero's journey, yet she remains largely passive, a character to whom things happen rather than who makes things happen. And her ultimate fate – revealed during a climactic rainstorm that's realized quite effectively by Kenneth Gall – undercuts the idea expressed in the program that she is Everywoman and this drama is her journey. (Not to mention it leaves us wishing that the game and more than capable McCann had more to do.) But even so, Oceana may well be the most cohesive and fully realized of these folkloric explorations that Vortex Artistic Director Bonnie Cullum has assembled. It has the power to pull you under and reveal another world, a world of the sea that once seen, you'll never turn your back on.