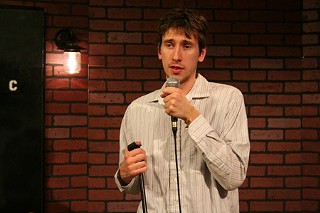 There was barely enough room to breathe in the filled-to-capacity Cap City Comedy Club on Monday, but paradoxically, there was still ample room to laugh. Of course, you really couldn't help yourself given the serious funny being served by the 14 finalists in the 2009 Funniest Person in Austin Contest. This year's lineup was remarkably strong, with polished, confident sets throughout – so solid, actually, that no stand-up stood out in the manner of previous years; at the end of the night, you weren't left feeling this comic or that comic had a lock on top honors. And given the considerable amount of time that emcee and departing FPIA Eric Krug had to vamp while waiting for the winner to be named, the judges had a tough time deciding that, too. In the end, they bestowed the comedy crown on Bryson Turner, a recent transplant to Austin who managed the neat trick of making well-worn stand-up fodder like white trash and sex seem fresh. (The lanky 25-year-old's description of his first coital escapade? "Like Scrooge McDuck diving in that roomful of gold coins.") Taking third place was Andy Ritchie, and second went to Ruby Collins, who also told the Joke of the Night, as determined by the judges. (It starts, "Robots scare me, but I kind of like the way they dance." And that's as far as I'm gonna go with it, 'cause it won't read funny the way she tells it funny.) Turner's first act as official Funniest Person? Surviving what looked like an assassination attempt by four jokers who rushed the stage and tackled him. His second? Telling jokes at the Velveeta Room, 521 E. Sixth, this Friday and Saturday, May 22 & 23, with fellow contestants Jeremy Neal and Chuck Watkins. For more information, visit www.thevelveetaroom.com.