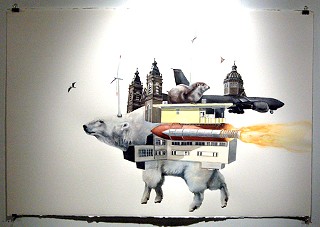 What do you call an evolutionary change producing a single lineage in which one taxon replaces another without branching? "Anagenesis" is the word, and it's the title of Anthony Garza's first solo show at Mass Gallery. The website states that Garza "depicts the hyper evolution and adaptation of life in the near future." That sounds a bit dark and apocalyptic, but this artwork is grounded in the splendor of nature.

Atlas had the weight of the world on his shoulders. Garza gives that responsibility to a shaggy goat. In a brilliant series of large paintings on paper, he asserts the primacy of the animal kingdom, combining creatures in mysterious settings, sometimes fusing them with geodesic domes, airplanes, and outer space. In Polar Station Transport, goat legs hold up a couple of classic modern buildings, an airplane, a rocket, and part of a cathedral, while a large otter sits on a roof, an owl flies above, and a powerful polar bear head seems in control. This complicated creature is forced into one whole, like a Transformer überanimal. In the simpler Pygmy Marmoset Nebula Protected by a Wolverine, a little monkey rides on the back of the prettiest wolverine I've ever seen. In Caribou TV Tower Launch, the animal charges with an antiquated TV tower harnessed to its powerful head. Garza has a knack for making these combinations believable.

When he paints a texture, it is spot on. His animal fur scrunches and cowlicks in all the right places, and his bird feathers lay flat. His architectural elements look right, too: Glass windows reflect light, stone towers look worn, and metal shines. His painting technique is graceful, essentially making watercolors. The dense areas of detailed painting are surrounded by airy white backgrounds. The work relates to that of other Austin artists – compositionally to Joseph Phillips' delicate floating islands and Sterling Allen's silhouette style, and it gives me a warm, fuzzy feeling of "holy wow," like the first time I saw the naturalist artwork of Jonathan Marshall or Peat Duggins – but Garza's creatures are entirely his own creations. His gorgeous, shaggy goat-bear walks along a barren landscape with building-absorbing and rocket-firing capabilities!

The series reminds me of foldout National Geographic posters, albeit less rational. Garza uses found Internet images, Austin architectural photos, and photos from a trip to Europe as his building blocks. He prints the images, cuts and collages them, then enlarges the collaged image to create the painting. Garza has mastered his own kind of visual Legos, assembling credible structures and new relationships into monumental nature paintings. 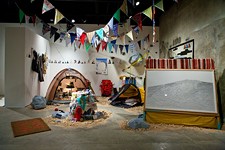