Under new – but very familiar – management

For most of the decade, the heart of Austin's impressive improv revolution has been the Hideout Theatre. The little Congress Avenue storefront, with its pair of cozy cabaret spaces, has been offering a steady diet of improv all week every week for almost 10 years, serving as both home base for dozens of groups that sprang up as legions of Austin performers responded to improv's siren call and host venue for several annual improv festivals that bring troupes from across the country to perform alongside local improvisers. Still, despite the energy of the improv community and a growing audience, keeping the doors open hasn't been any easier for the Hideout than any other Downtown entertainment establishment, and with the recent economic hits, the Hideout's 10th year was looking like it might be the theatre's last.

But that same community that made the space a hive of improv isn't letting it vanish into the Heaven of Lost Austin Clubs just yet. Three scene regulars who cut their improv teeth on classes at the Hideout have acquired the venue in order to keep that heart of Austin improv beating. Jessica Arjet of the Flying Theater Machine and Kareem Badr and Roy Janik of Parallelogramophonograph are the new owners, and with support from Michael McGill, Andy Crouch, and Kaci Beeler, they have plans to make the Hideout an even more active improv center. They'll roll out their ideas – and solicit feedback – during a panel discussion on Saturday, June 6. That will be after Friday's grand opening celebration with special shows at 8pm and a party following. For more information on these and other special activities that weekend, visit www.hideouttheatre.com. 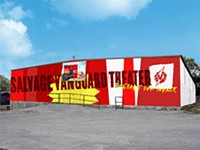