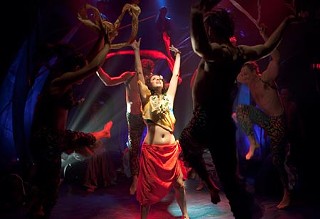 When the mercury starts its inevitable rise, Central Texans take refuge in the water. And this spring, they'll have one more aqueous haven than usual: inside the Vortex. For its current show, the theatre's interior has been transformed into an underwater world where you can not only beat the heat but swim with mermaids, sirens, and selkies and meet Inuit sea goddess Sedna, Aztec goddess of water Chalchiuhtlicue, and other goddesses with ties to the sea.

It's the latest exploration of myth from Vortex Repertory Company Artistic Director Bonnie Cullum and her tribe of adventurous theatre makers, whose other ventures in this vein – Holy Well and Sacred Flame, Trickster, the Dark Goddess series – have provided the theatre with some of its biggest hits. Like those shows, Oceana brings together from many cultures deities, spirits, and beings that share a connection – in this case, water – and builds a ritual celebration around them, with stories, original songs, dances, and visual spectacle. As the creators have done more to, well, immerse themselves in their subject this time – the cast spent six months on the project and even took a communal trip to the beach to rehearse in the Gulf of Mexico – Oceana may be especially rich. And beneficial, adds Cullum. "I believe that the ebb and flow, the power of the ocean to soothe and heal, also created health in the process."

So dive in, and if you really want to get in the spirit, dip into Vortex's Enchantment Under the Sea Dance this Saturday, May 16, 8pm, at the theatre. At this costume fundraiser for the theatre, you can be a sea deity yourself and shake your dorsal fin to music by Los Super Avengers and DJ Chet Polo, plus enjoy food, drink, tarot readings, face-painting, a silent auction, and more.

Oceana
The Vortex's latest theatrical immersion in myth sinks you down 20,000 leagues