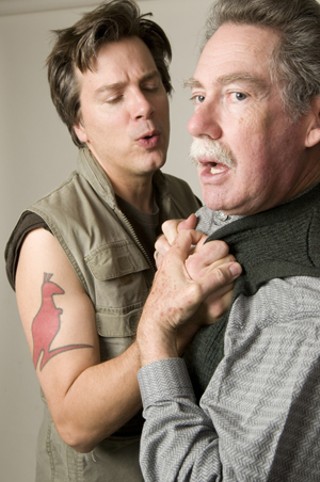 City Theatre, through May 10

Different Stages' production of A Number is one of those shows where all the ingredients – performance, design, and preparation – come together in a fascinating, absorbing combination.

It's not an easy play. If it were a meal, this show would be like the octopus salad I had one time at Whole Foods, not some frozen pizza you pop in the oven. However, A Number is worth seeing for the same reason that culinary adventures are worth risking: You learn a little something new about the world.

The play presents two men onstage. Salter (Norman Blumensaadt) is trying to reassure his son (Marc Balester) that he really is his son, not just some replacement replica. That kind of worry can crop up when you discover that your genetic material has been cloned roughly 20 times without permission.

The sci-fi aspect to A Number ends there. Cloning may be the hook, but the play is more about identity and how identity is established. It's also about coming to terms with the great mistakes of life. Balester plays the multiple clones masterfully, and even without costume changes, each clone is very much his own character. Salter is a great role for Blumensaadt, who brings a natural, nervy tension to Salter's moral queasiness. The actors are aided by a stark set of black and white, designed by Ann Marie Gordon, with hard lines and a background that resembles prison bars.

For most people out there in the world, Caryl Churchill's extremely sparse writing is not easy to digest. In A Number, she gives us overlapping dialogue from a script without punctuation or stage directions. The events of the story are hard to define, because Salter contradicts himself and because Churchill resists including a lot of real-world specifics. Instead, she provides only a few concrete images from the lives of her characters: a boy calling out at night for his father or an underground dwelling with coffins in the walls.

Churchill is considered an important and insightful playwright in the same category as Harold Pinter and other writers of the 20th century who looked to deconstruct our assumptions about stories and how we tell them. But let's face it: For the average person who didn't take an undergraduate seminar in post-World War II drama, it's easy to be left feeling adrift at the end. I see and write about theatre all the time, and even I feel like Churchill's being unfair, making me do work when I just came to see a play.

Different Stages does something very smart about that. Audience talk-backs are nothing new, but with this production, the postshow discussion is actually part of the evening, not just something you sneak away from so you can get to your car first. The reason for the talk-back may be because the play clocks in at only 60 minutes, and there were bang-for-buck considerations. But with A Number, the talk-back also reassures the audience: No, it wasn't just you; the play was really challenging. Dramaturge C. Denby Swanson leads the open-ended discussion, inviting the audience members to piece together what they saw for themselves, and she makes everyone feel pretty smart in the process. Not bad for an extra.

A Number is worth seeing. Bring a friend, in fact. Half the fun is talking about it later.