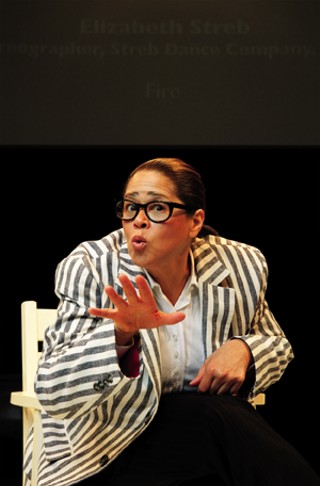 To a child, death looms large: a great, mysterious black curtain that things slip behind, never to be seen again. Is heaven back there? Or something else, something not good? No one is sure,

which makes the thing even more forbidding.

At the outset of Let Me Down Easy, Anna Deavere Smith shares this child's perspective, not from the life of another, as we might expect based on her interview-based works, Twilight: Los Angeles, 1992 and Fires in the Mirror, but out of her experience, a signal to us that this work follows a personal path, with the artist pursuing her own consideration of mortality and what it means to confront that ominous curtain.

Smith embarks on that journey with a tantalizing impersonation of herself – and you do sense her applying the same technique to herself that she does to the other people she presents onstage, that painstakingly precise re-creation of her subject's gestures, words, rhythms, inflections, and pitches, including every last "um" and "ah" – before going on to explore mortality in her signature fashion, through the experiences and observations of others. Initially, those are people whose livelihoods involve pushing the boundaries of physical expression and who confront mortality as a matter of course: a prizefighter, a rodeo bull rider, Lance Armstrong. With Armstrong, that confrontation also concerns his battle against cancer, and in time, Smith shifts her attention to patients with catastrophic illnesses. Speaking with patients leads her naturally to the doctors who treat them, which in turn leads to the health-care system in which those physicians labor. And so it goes, following a road that winds from the sports arena to the hospital corridor to the flooded streets of New Orleans to an orphanage in Johannesburg, South Africa, to, ultimately, the graveside.

There's a meandering quality to the work as it's presented here, but that's the nature of personal journeys, isn't it? A discovery on one trail may lead you down a different one, and what you find there may send you in yet another direction. Even when a digression feels less than organic – an analysis of our broken health-care system, while timely, seems far afield of the work's focus on personal experience – it fits into the work's questioning nature. Smith refers to the project as an inquiry, and that's apt. She's probing for answers to big questions about death and that thing that happens before it, life.

Like a good journalist, Smith will pursue answers in many places and report what she finds with scrupulous fidelity. Her portraits of the two dozen individuals here are strikingly distinct and represent their subjects in the fullness of their humanity. And though some are caught in tragic circumstances, Smith never shows pity for them or invites us to. She is clear-eyed in her embodiment of each, the better for us to admire these individuals' courage and compassion and resilience in facing the end facing us all.

Ultimately, Smith's long and winding road brings us back where we started, to a child's perspective on death. Only this time, the child is terminally ill and does not fear it. Through him comes the gift in Smith's odyssey: a way to slip behind the curtain, to ease away from life, in peace. In that gesture is generosity and grace, and Smith offers it to us in the openness of the Arena Stage, where we all face one another with no curtain in sight.