Recreating the Domain: Eerie soundtracks for our second Downtown

Eerie soundtracks for our 'second downtown' 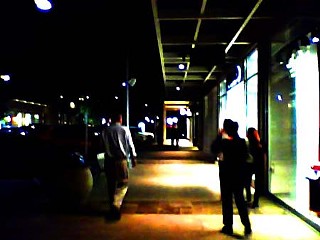 Still haven't been to the Domain, that not-so-radical experiment in New Urbanism beckoning from Northwest Austin? Still need a reason to use the gas to drive there – assuming you're not one of the few residents of the rental units above or around the outdoor shopping mall? Here's a rationale for visiting the controversial district envisioned as a second downtown without losing your cred in Austin's first Downtown.

It starts at www.recreatingthedomain.com, where six artists have created walking tours of the Domain. Download the files, put them on a portable music player, use that gas to get to the magical melding of residential and commercial units, and press play.

Alex Keller, the curator of this experiment in audio art, comes from a background of sound design and co-hosts KOOP Radio's aptly named experimental music show, Commercial Suicide, making him uniquely qualified to wrangle the disparate offerings of the Recreating the Domain project. "I wanted it to be a smart examination of ... whatever this is," Keller says, summarizing the impetus behind collecting these ongoing artworks. "I used to walk around here during lunch, and I always wanted to see the cracks, looking for the cast-only doors." It's that Disney-fication that fuels the surreal nature of the Domain and what these pieces hope to bring into focus.

The tours range from performance art, where you're told to be the performer, to avant musical musings using the white noise of the Domain itself as a jumping-off point. Sometimes the audio tours call attention to themselves, asking participants to listen to the produced audio more intently. What ties them all together, however, is a common aim to make listeners look more closely at their surroundings. When the narrator of Brent Fariss' Dominion: a walking tour says to cross the street illegally, only then is it apparent that the Domain is designed to prohibit jaywalking. Keller's Curator's Notes points out the speakers on the light poles and how strange a canned soundtrack would be in any other "neighborhood." Other pieces merely flavor the experience of walking the Domain. Tan Bodies, by Bill Bridges, combines jumbled buzzwords, ad speak, and other language for an end product of creepy poetry. Similarly, Vanessa Rossetto's ambient soundscape combines field recordings with violin tones, making J. Crew bargain shopping eerier than ever before, as if seeing the cops on three-wheeled Segways wasn't enough.