With this play about theatre and tigers, the Rude Mechs earn their stripes forever 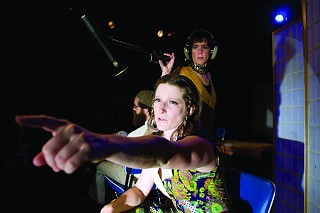 The Off Center, through May 2

Should I begin this review with a question?

Answer: Rubik's Cube. Or any puzzle of sufficient complexity. Life itself will do, as an example.

Given that so much of our inner lives – and the outer vastness of life in general – can feel like a Rubik's Cube that's always just a few too many moves away from being solved. Given that the creative arts, at their best, provide not only a welcome distraction from the grave toward which we all plummet but may also evoke the feeling that, oh, here's one of those moves that helps solve the Cube, that makes just a bit more sense of my life, of the larger world and its confounding patterns of chaos. Given that, is it any wonder that some artists eventually deconstruct their art, those smaller cubes designed to reiterate relevant sections of that largest puzzle, in an attempt to discern the most effective parts?

No, this review should have started with a statement.

Such as: There's that one episode of Star Trek, the original series. It's called "Shore Leave"; it was written by Theodore Sturgeon, and there's a tiger in it. There's a tiger in the Rude Mechanicals' The Method Gun, too. It's a coincidence, I'm pretty sure. I doubt that Kirk Lynn, who wrote the script – or Shawn Sides, who directed it, or the other Rudes and their friends who collaborated fiercely on the project for years – was watching that episode of Star Trek and thought, "Boy howdy, let's have a tiger in our show, too!"

And yet there's a tiger in The Method Gun for the same reason that there was a tiger on the seemingly paradisiacal planet to which our heroes beamed down for some much needed R&R. The planet in "Shore Leave" is a highly sophisticated amusement park, see. (If that's a spoiler, I'm sorry, but you've had more than 30 years.) And the tiger, unknowingly conjured by Lt. Sulu, is just the sort of danger to add a necessary excitement to the idyllic landscape. But that's not why there's a tiger in The Method Gun.

Sometimes the move you thought would be a potentially Cube-solving turning point turns out to only make things worse. Thus, rehearsals. Thus, first – and second and third – drafts. Whatever it takes to find your way in the forest of the night.

"The more complex the mind, the greater the need for the simplicity of play," says James Tiberius Kirk, flaunting his captainly epiphany regarding the amusement-park planet's raison d'être. Which is where, in the midst of the Rudes' explorations and deconstructions of theatre artist Stella Burden's "Approach" method of acting, the tiger in The Method Gun comes in. Look: It's not a real tiger.

Oh God, it's one of the actors in a tiger suit. And it's the cutest tiger suit you ever saw! And it's a clever tiger! And it talks with a funny accent! Maybe it's a Tigerish accent!

"Tigers are good for plays because of the simple fact that we are a symbol," it gleefully informs the audience. "Tigers represent both life on this planet and death. ... And I am this play's tiger!"

Each diversionary appearance of the tiger, that playful simplification of life and death, is greeted with audible delight from the audience, even as that audience is drawn deeper into the Rubik's Cube of the Rude Mechs portraying a troupe of actors who are attempting to re-create Tennessee Williams' A Streetcar Named Desire without any of the main characters(!), using the Approach as taught by Stella Burden – herself a vanished puzzle constructed by those same Rudes. The re-creation of the Streetcar re-creation is a fascinating show to watch, especially if you've ever been involved with or enchanted by theatre, more so if you've also watched yourself being yourself on the less defined stages of life and been unsure of your performance there. But, after a while, this could get to be a bit much, yes?

A danger is that there are too many layers, too much thespian navel-gazing going on, too intense cerebral machination needed to appreciate this whole ... whoops, here comes that tiger again! Oh, the ferocious thing! Oh, it's adorable!

Is this the part of the review where I mention that Kirk Lynn is a fucking genius and that the other Rude Mechs are also geniuses? Or does that come later?

Also: Never mind the Rubik's Cube. In the first place, you'd have to splice its genes with the genes of a hall of mirrors for it to work as a metaphor for The Method Gun, and as neither cubes nor mirrors have genes, the whole thing's far too strained before we even begin. Think, instead, about your favorite caper film. Rififi, maybe. The Italian Job. Ocean's Eleven. There's a goal to be reached, much fine loot to be gained, if only you can suss the system and time the diversions and jimmy the locks and make it through those crisscrossed laser beams – that lattice of amplified light, the breaking of which will trip the alarm, and that's it, hero, so close to heaven, and now you're hella fucked.

The Method Gun is the Rude Mechanicals looking at theatre in the ways, approximately, they've looked at punk rock in Lipstick Traces, Nikola Tesla in Requiem for Tesla, the Wild West in El Paraiso, and soap operas in Decameron Day 7: Revenge: through theatre. Now they're looking directly at theatre through theatre, at what it has to offer the people who perform it and the people who watch those performers. The difficulty is in reaching the goal, in making the looking as entertaining as what they're looking at, making what they're looking at as entertaining as theatre can be, making it all come together in front of an audience that wants to be entertained but would also appreciate the feeling that, oh, here's one of those moves that help solve the Cube. (Okay, the Cube is back.)

I tell you that the Rudes have done this. The writer, the director, the designers, and especially the five performers: Thomas Graves, Heather Hanna, Jude Hickey, Hannah Kenah, and Lana Lesley. They've sussed the system and timed the diversions and jimmied the locks. I tell you that the Rudes do this every night they perform The Method Gun and that, during the final minutes of the show, they do the whole thing over again – this time between swinging pendulums of light, the laser-caged caper finale gone Newtonian old school.

The show is a fake; the acting's pretense; the danger is real; it's impressive as hell. But even without the lights framing symmetry in perfectly timed arcs and the Rudes stepping or bending or fighting or dancing expertly between them, the best danger of theatre was already there: the danger that something real will emerge from this stage of fakery and pretense, and it may have teeth.