Art City Austin 2009 is on its way this weekend, and the annual outdoor visual-arts fair is seriously spreading the love this year: to architects, to performance artists, to bicyclists, and to, well, everyone in town. See, not only has sponsoring organization Art Alliance Austin expanded its Art City partners to include Pecha Kucha Austin, the Fusebox Festival, and Mellow Johnny's Bike Shop, it's also commissioned performance-art visionary Jaclyn Pryor (floodlines) to create a new iteration of her love-note courier service, pink, so anyone who visits Art City this Saturday and Sunday will be able to send a love note to anyone else in the city via a messenger on a pink bike.

The hub of activity is once again along West Cesar Chavez between Lamar and Guadalupe and across the First Street Bridge, where more than 200 artists from around the world will be exhibiting their work. Look for the F.O.I.L. entrance beacons commissioned from Robert Gay and Lucy Begg of local design firm Thoughtbarn; they're covered with small foil leaves and designed so each leaf will move with the wind. On either end of the footprint will be stages booked by the Austin Music Foundation: Colin Gilmore, Golden Arm Trio, the Black & White Years, Atash, the Hudsons, and the Brent Allen Band grace the Lamar Stage, while the First Street Stage will feature Zookeeper, Leatherbag, Bavu Blakes & the Extra Plairs, El Tule, Nakia & His Southern Cousins, and David Garza. And a kids' stage will feature DJ Matt Sonzala, Austin School for the Performing and Visual Arts' YouthCast winners, Aftermath, OMG, Carson McHone, Knights of Steel, and Chief Rival. Plus, between the end of Saturday's fair and the start of Sunday's, you can enjoy Art After Dark Austin, with music from soul combo Black Joe Lewis & the Honeybears and DJ Chicken George; food from Word of Mouth catering, Streeats, the Belmont, the Salt Lick, Tacodeli, Holy Cacao, and Cookie Lounge; and beverages from Twin Liquors and Bacardi.

Can you feel the love? If so, you might want one of those pink couriers to send a note to Art Alliance Austin. For more information, visit www.artallianceaustin.org. 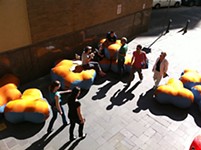 Art City Austin
To really swing and bounce around Downtown ...

Art City Austin: Everything old is new again
The annual art fair once known as Fiesta and the Austin Fine Arts Festival makes its debut after reinventing itself